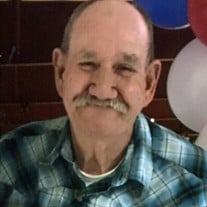 Leroy George Peterson was born on July 24, 1949, in Laquey, Missouri to Homer Alvin and Vernadell (Hickey) Peterson and passed away on November 18, 2020 at Lake Regional Hospital in Osage Beach, Missouri at the age of seventy-one years. George grew up and attended school in Laquey. He entered the United States Navy on May 29, 1969 and served his country faithfully until his honorable discharge on April 23, 1971. George was united in marriage to the love of his life, Jennifer, on December 1, 1971 in Laquey and together shared thirty-six years of memories before her passing on October 5, 2008. George and Jennifer were blessed with two children: Mike and Tonja. He was a devoted husband to Jennifer and loving father to his children. During his working career, George worked hard to provide for his family and taught his children the value of hard work. He was employed with Willard Asphalt for several years, worked as a janitor at the Richland School District, and retired from Quaker Windows after fifteen years of service. George lived a simple life and enjoyed playing cards, especially pitch. He liked spending time outdoors hunting and fishing. His family was most important to him, and he truly cherished the memories made with them; especially with his grandchildren and great-grandchildren. George was a man of faith and baptized at a young age. He attended Independence Baptist Church and truly enjoyed the fellowship and his Church Family. George is survived by his loving children: Mike Peterson and wife Dee of Laquey, MO and Tonja Jarvis of Richland, MO; grandchildren: Karly Causey and husband Dennis of Laquey, MO, Ryan Jarvis and girlfriend Harmony Cline of Richland, MO, McKaylee Peterson and fiancé Shawn Larsen of Laquey, MO, and Kaitlyn Gipperich of Richland, MO; great-grandchildren: Desean Taylor, Dennis Causey III, Arabella Causey, and Haizlee Jarvis; extended family and friends. Preceding him in death, his wife: Jennifer Peterson; parents: Homer and Vernadell Peterson; two brothers: Laverne Peterson and Bobby Peterson; and two sisters: Betty Hill and Linda Skidmore. George will be greatly missed by all who knew and loved him. Memorial Contributions may be made in memory of Leroy George Peterson. Online condolences may be entered at wilsonmortuary.com

Leroy George Peterson was born on July 24, 1949, in Laquey, Missouri to Homer Alvin and Vernadell (Hickey) Peterson and passed away on November 18, 2020 at Lake Regional Hospital in Osage Beach, Missouri at the age of seventy-one years. George... View Obituary & Service Information

The family of Leroy George Peterson created this Life Tributes page to make it easy to share your memories.

Send flowers to the Peterson family.