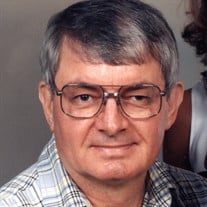 Leslie Allen Curley was born on April 28, 1943, in St. Louis, Missouri to Delbert and Lorene (Fox) Curley and passed away on May 12, 2020, in Salem, Missouri at age of seventy-seven years. Allen grew up on the family farm in Lenox, Missouri and attended school in a one-room schoolhouse near Anutt. He entered the United States Army on March 2, 1965 and served his country faithfully until his honorable discharge on February 3, 1967. While stationed in Okinawa, Allen was assigned to guard a missile site with his dog “Prince”. During his time in the military, he was able to travel the world and for his faithful service, Allen earned many decorations, medals, ribbons, and awards. After his time in the service, Allen met the love of his life, Sandra Faye Mason. Allen and Sandra were united in marriage on November 4, 1967 and together shared fifty-two years of marriage and were blessed with three daughters: Dana, Denise, and Melissa. A self-employed entrepreneur, Allen worked hard to provide for his family. He was a man of many trades who throughout the years worked for United Telephone, sold Combined Insurance door to door, opened Curley Insurance Agency, and was an agent for Capital Savings and Loan. Allen was co-owner of Salem Pine Pole and later founded Timber Industries Inc. He built three hardware stores in Rolla, Salem, and Roby. During all this time Allen was a multi-level marketer with numerous companies. He was always on the phone “pitching” something and his family always teased him “we’re going to bury you with your phone in hand”. In his spare time, Allen enjoyed fishing at the lake with his buddies Carl and Eddie. He also spent many hours flying his Cessna 150. Allen loved watching westerns, especially John Wayne and Lone Ranger. He had a competitive spirit and enjoyed playing “Backup 8”. Due to his hard work, Allen and his family were able to travel the world to include England, Switzerland, Bahamas and Hawaii. Allen cherished the time spent with his family and friends, especially with his grandchildren and great-grandchildren. Allen is survived by his loving wife Sandra Curley of the home; three children: Dana Connell and husband Wes of Salem, MO, Denise Copeland and husband Ron of Salem, MO, and Melissa DuBois and husband Greg of Rolla, MO; four siblings: Joyce Gray of Salem, MO, Janice Roper and husband Bob of Edgar Springs, MO, Michael Curley and wife Jequetta of Viburnum, MO, and Teresa Decker and husband Lyndell of Salem, MO; three sisters-in-law: Mary Ann Curley of Salem, MO, Gisela Curley of Salem, MO, and Doris Mason of Florissant, MO; eleven grandchildren: Zach Chafin and wife Kerri, Danielle Kissir and husband Andy, Katelyn Connell, Grant Connell, Garrett Connell, Caleb Copeland, Cameron Copeland, Emma Copeland, Kaiden DuBois, Sylis DuBois, and Krielle DuBois; three great-grandchildren: Carter and Kolby Kissir, and Lola Chafin; as well as several nieces, nephews, extended family and friends. Preceding him in death were his parents: Delbert and Lorene Curley; brothers: Leroy Curley, Larry Curley, Jack Curley, and Wayne Curley; sisters: Gail Curley and Brenda Curley; brother-in-law, David Gray Sr.; and nephews: Daniel Decker and Nicholas Harbison. Allen was a strong man of faith, who was a devoted husband, father, grandfather, and great-grandfather. He will be deeply missed. Funeral Services for Leslie Allen Curley were held Saturday, May 16, 2020 in the Wilson Mortuary Salem with Pastor Lyndell Decker officiating. Song selections played were “I Wish Grandpas Never Die” and “On the Other Side”, closing with the Lone Ranger theme song. Arrangements were under the direction of Wilson Mortuary of Salem, Missouri.

Leslie Allen Curley was born on April 28, 1943, in St. Louis, Missouri to Delbert and Lorene (Fox) Curley and passed away on May 12, 2020, in Salem, Missouri at age of seventy-seven years. Allen grew up on the family farm in Lenox, Missouri... View Obituary & Service Information

The family of Leslie "Allen" Curley created this Life Tributes page to make it easy to share your memories.

Send flowers to the Curley family.