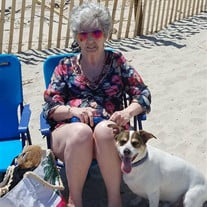 Letha Jane (Haase) Landis was born on September 23, 1936, to Robert and Bertie (Buffer) Haase in Noel, Missouri. She was one of eight children and grew up and attended school in Webb City. At an early age, she accepted Christ and was of the Baptist faith. On February 1, 1983, Letha was united in marriage to her sweetheart, Charles Gary Landis in Jacksonville, Illinois. Letha and Gary together shared eighteen years of memories before his passing on November 22, 2001. Letha was the proud mother of three children: Robert, Teresa, and Suzan. She was a devoted military wife, loving mother, and caring grandmother, great-grandmother, and great-great-grandmother. She took great pride in raising her family and being by her husband’s side. Spending time with her family was most important to her and she cherished the memories made with them. Letha was great with her hands and was very talented at crocheting, especially afghans. She would often pass them on to family and friends as keepsakes to treasure. Letha liked to go fishing and was always ready for a game of Bingo. She loved shopping at antique shops, browsing through flea markets, and finding bargains at thrift stores. Letha enjoyed reading magazines, especially the gossip columns, they were her favorite. Letha departed this life on June 14, 2021, at the Community Hospice Hadlow Center for Caring in Jacksonville, Florida at the age of eighty-four years. She leaves behind to cherish her memories, her loving grandchildren: Billie Elmore of Orange Park, FL, Michele Nichols and husband John of Dixon, MO, Brandy Cole of Joplin, MO, and Robby Cole of Joplin, MO; great-grandchildren: Kennedy Beauchamp, Lucas Crossland, Alexys Troyer, Zachary Pritchett, Cole Nichols, Tyler Crossland, Harley Troyer, Daeton Watkins, and Benjamin Watkins; great-great-grandchild: Freya, and one on the way; Cole, her special dog companion of 14 years; as well as a host of nieces, nephews, other relatives, and friends. Letha is preceded in death by, husband: Charles "Gary" Landis Sr.; father: Robert Haase; mother: Bertie (Buffer) Troutman; children: Robert Cole Jr., Teresa Salts, and Suzan Cole; granddaughter: Melinda Elmore; siblings: Frances Haase, Goldie Vicory, Chester Haase, Lester Haase, Robert Haase, Donie Kennedy, and Sarah "Betty" Brown. Letha lived life to the fullest and had an adventurous, outgoing personality. She will be dearly missed by all who knew and loved her. Memorial Contributions may be made in memory of Letha Landis to Waynesville Animal Shelter and left at Wilson Mortuary. Online condolences may be entered at wilsonmortuary.com

Letha Jane (Haase) Landis was born on September 23, 1936, to Robert and Bertie (Buffer) Haase in Noel, Missouri. She was one of eight children and grew up and attended school in Webb City. At an early age, she accepted Christ and was of the... View Obituary & Service Information

The family of Letha Jane Landis created this Life Tributes page to make it easy to share your memories.

Send flowers to the Landis family.