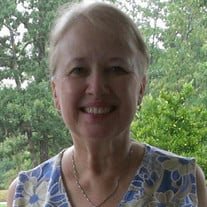 Linda Susan (Hensley) Langley was born on October 9, 1948, in St. Louis, Missouri to Bob and Norma Combrevis. She was later adopted by Albert Hensley after he and Norma were married and they raised her in Bridgeton, Missouri. Linda graduated with the Class of 1966 from Pattonville High School. She was a bright student and a part of the National Honor Society. Linda furthered her education at Rockhurst College in Kansas City and Johnson County Community College. Linda met the love of her life, Ralph “Budd” Langley while attending college and was united in marriage on October 14, 1988 at the Johnson County Courthouse. Linda and Budd were blessed with thirty-two years of marriage together and shared five children: Bryan, Sharon, Cappi, Chad, and Joe. Linda was a hard worker; she was employed with AMC Theaters International and worked her way up to senior cash manager. Linda retired after many dedicated years. She took great pride in caring for her home, she spent a lot of time in the kitchen cooking and baking for her family. Linda was a proud mother and cherished the time spent with her children. She was a doting grandmother and great-grandmother, she adored her grandchildren and great-grandchildren, treasuring the memories made together. Linda enjoyed the outdoors and loved to garden. In her spare time, she used her talented hands to quilt and sew. Linda won several prizes over the years for her beautiful work and was a part of the Current River Scrappers Quilt Guild. Linda departed this life on June 29, 2021, at Cedar Pointe in Rolla, Missouri at the age of seventy-two years. She leaves behind to cherish her memories, her loving husband Budd Langley of the home; children: Bryan Lowe of Salem, MO, Sharon Miller and husband Ed of California, Cappi Criscone and husband Tony of Jadwin, MO, Chad Lowe and wife Lisa of Indiana; and Joe Langley of Kansas; grandchildren: Anthony, Alexus, Adrian, Aaron, Aidan, Aislynn, Lauren, Justin, Brittany, Jacqueline, and Anthony; five great-grandchildren; siblings: Carole Mentzel and husband Al, Gary Hensley and wife Robyn, Debbie Middleton and husband Al, and David Hensley; stepmother: Betty Combrevis; brother-in-law: Ray Standiford; as well as a host of nieces, nephews, cousins, other relatives and friends. Preceding her in death, her parents: Albert and Norma Hensley and Bob Combrevis; and sister-in-law: Marcia “Sis” Standiford. Linda was a loving and caring wife, mother, daughter, sister, grandmother, and great-grandmother. She will be forever missed by all who knew and loved her. Funeral Services for Linda Susan (Hensley) Langley were held Wednesday, July 7, 2021 in the Wilson Mortuary Salem Chapel with Tony Criscone officiating. Song selection played was “Amazing Grace”. Serving as Pallbearers were Bryan Lowe, Chad Lowe, Aaron Lowe, Aidan Lowe, Adriane Lowe, Anthony Lowe, and Alexus Lowe. Burial was in the Jadwin Cemetery. Arrangements were under the direction of Wilson Mortuary of Salem, Missouri. Memorial Contributions may be made in memory of Linda Langley to St. Jude Children’s Hospital or the Alzheimer’s Association Online Condolences may be entered at www.wilsonmortuary.com

Linda Susan (Hensley) Langley was born on October 9, 1948, in St. Louis, Missouri to Bob and Norma Combrevis. She was later adopted by Albert Hensley after he and Norma were married and they raised her in Bridgeton, Missouri. Linda graduated... View Obituary & Service Information

The family of Linda Susan (Hensley) Langley created this Life Tributes page to make it easy to share your memories.

Send flowers to the Langley family.