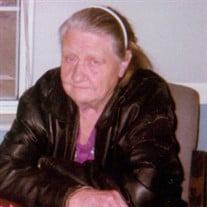 Lola Marie (Swank) Masterson was born February 10, 1945, in Shamokin Dam, Pennsylvania to Antrim and Goldie Erma (Smith) Swank and passed away April 4, 2021 at her home in Salem, Missouri at the age of seventy-six years. Lola grew up in Reynolds County, Missouri and frequently lived in Oklahoma, Florida, and Kansas throughout her life. At a young age, she was united in marriage to Paul Wilkey and shared many wonderful memories. On March 22, 2019, Lola was united in marriage to her sweetheart, Frank Masterson and shared almost two years of marriage before his passing. Lola spent most of her working career as a Certified Nurse Assistant with the Missouri Veterans Home in St. James. She took great pride in her work and cared for the residents there. Lola started her nursing career at Mcalester Manor in Oklahoma, becoming a Certified Nurse Assistant was her proudest accomplishment and she loved making a difference in the lives of the elderly she worked with. Lola also worked as a security guard for three weeks in Oklahoma. Lola loved spending her time outdoors. She enjoyed hunting for wildlife, mushrooms, and walnuts. Lola spent time at the Current River camping, swimming, and fishing. She liked to ride her four-wheeler and collect cans to scrap. Lola was part of the Cherokee Tribe and an Indian Princess. She was always doing something and treasured spending time with her family, especially her sister and her nieces and nephews. Lola was adored by her family and leaves behind to cherish her memories, her loving sister: Myrtle Adams and friend Jimmy Gipson of Freeburg, MO; nephews: Richard Swank and wife Shaina of Poplar Bluff, MO and Nolan Swank of Bunker, MO; niece: Michelle Ottwell and husband Brian of Ellington, MO; special friends: Rick Girardier of Salem, MO and Verna Thompson of Salem, MO; as well as a host of other relatives and dear friends. Preceding her in death, husbands: Frank Masterson and Bud Sawyer, parents: Antrim and Goldie Swank; and brothers: Andrew and Richard Swank. Lola will be forever missed but fondly remembered by all who knew and loved her. Funeral Services for Lola Marie (Swank) Masterson were held Wednesday, April 07, 2021 in the Wilson Mortuary Salem Chapel with Pastor Chris Hendrix officiating. Song selections played were “In The Garden”, “Seven Spanish Angels”, “Old Rugged Cross”, and “Wings Of A Dove”. Serving as Pallbearers were Richard Swank, Brian Ottwell, Rick Girardier, Michelle Ottwell, Steve Gipson, and Michael Swank. Burial was in the New Harmony Cemetery. Arrangements were under the direction of Wilson Mortuary of Salem, Missouri.

Lola Marie (Swank) Masterson was born February 10, 1945, in Shamokin Dam, Pennsylvania to Antrim and Goldie Erma (Smith) Swank and passed away April 4, 2021 at her home in Salem, Missouri at the age of seventy-six years. Lola grew up in Reynolds... View Obituary & Service Information

The family of Lola Marie (Swank) Masterson created this Life Tributes page to make it easy to share your memories.

Send flowers to the Masterson family.