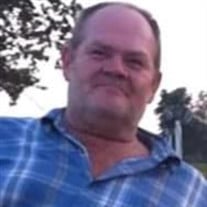 Lonnie Franklin Horton was born on May 4, 1967, in Ironton, Missouri to James Lee and Mary Gale (Volner) Horton and passed away March 17, 2020, in the Barnes Jewish Hospital of St. Louis, Missouri at the age of fifty-two years. Lonnie grew up and attended school in Viburnum. He graduated with the Class of 1986 and was well known as "The Bonz". Lonnie was a man of faith and baptized on October 19, 2014 at First Baptist Church in Doniphan, Missouri. He was united in marriage to his sweetheart, Jennifer Carol Emery on June 10, 2006, in Doniphan and together shared thirteen years of memories and were blessed to share four children: Lonnie James, Rachel, Frankie, and Johnnie. During his working years, Lonnie worked at the sawmill, D & D Tire, at a nail company, and was an auto mechanic. He was currently working at Ripley County Water District #2 in Doniphan and earned a certificate in Water Distribution Level - II. Lonnie was a hard worker, who had a willingness to help customers with any water-related problems. When he wasn't working, Lonnie cherished his time spent with his family and treasured his grandchildren, nieces and nephews. He was called "Uncle Lonnie" by many in the community who had no relation. Lonnie was a loving and caring person who would do anything for his family and friends. He was also known as "Coach Lonnie", Lonnie and Jennifer coached youth league soccer for their grandson and were team champs for several seasons. Lonnie enjoyed spending time outdoors, he liked to go deer hunting and fishing, especially with his grandchildren. He always wanted a farm, and was currently raising chickens with his grandson, he had also raised beagles and ran "Little Man's Beagles". In his spare time, he could be found watching John Wayne movies and video messaging with his grandchildren who live in Arizona. Lonnie's biggest accomplishments were his children, he was very proud of them. His children and grandchildren were his world. Lonnie is survived by his loving wife Jennifer Horton of the home; four children: Lonnie James Horton of Desoto, MO, Rachel Barrow of Doniphan, MO, Frankie Boyd and partner Abby of Salem, MO, and Johnnie Horton (Boyd) and wife Amber of Arizona; four brothers: Mark Horton and partner Danielle of Caledonia, MO, Jimmie Horton of Ironton, MO, Greg Horton and wife Joyce of Bixby, MO and Mike Horton of Doniphan, MO; one sister: Kimberly Statler and husband Terry of Belgrade, MO; grandchildren: Peyton, AddaLynn, Lane, Quentin, Lucian, and Greyson; five nieces; seven nephews; extended family and friends. Preceding him in death were his parents: James and Mary Horton; infant son: Landon Rylee Gray Horton; and granddaughter: Kayleigh Horton (Boyd). Lonnie will be remembered as a dedicated husband, caring father and brother, loving grandfather and uncle. He will be forever remembered and greatly missed.

Lonnie Franklin Horton was born on May 4, 1967, in Ironton, Missouri to James Lee and Mary Gale (Volner) Horton and passed away March 17, 2020, in the Barnes Jewish Hospital of St. Louis, Missouri at the age of fifty-two years. Lonnie grew... View Obituary & Service Information

Customized sympathy cards. Mailed for you.