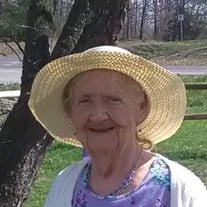 Loretta Mae (St. Lawrence) Champney was born February 25, 1942 in Massachusetts to Amy and Pearl St. Lawrence and passed away March 4, 2022 in Salem, Missouri at the age of eighty years. Loretta was raised around Massachusetts and New Hampshire. She was united in marriage to the love of her life, Charles Champney, on October 26, 1960 in Marlow, New Hampshire and shared forty-nine years of marriage before his passing on October 23, 2009. Loretta and Charles were blessed with five children: Charles Jr., Debby, Richard, Clifton, Sammy, and Kelly. Loretta was a proud mother, devoted wife and dedicated worker. She took great pride in caring for her home and throughout the years worked at the International Shoe Factory, Whitney Brothers making doll furniture, and later retired from housekeeping at the nursing home. Loretta was gifted talented hands and used her gift to crochet dolls, mittens, hats, and gloves. Her generosity was shown in the handmade gifts she made for others. Loretta was a wonderful grandmother; she adored her grandchildren and cherished the memories they made together. Loretta was a lady of faith and member of the First Baptist Church of Lebanon, New Hampshire. Loretta is survived by her loving children: Richard Champney of Salem, MO, Clifton Champney of Holts Summit, MO, Sammy Champney of Maine, and Kelly Champney of Bellows Falls, VT; brothers: Tom, and Bobby; sisters: Rita and Jeanie; and a host of grandchildren, nieces, nephews, other relatives, and dear friends. Preceding her in death, husband: Charles Champney Sr.; son: Charles Champney Jr.; daughter: Debby Weaver; and brother: Dick. Loretta was a sweet and wonderful lady full of generosity, love and kindness. She will be forever missed but never forgotten. Online Condolences may be entered at www.wilsonmortuary.com

Loretta Mae (St. Lawrence) Champney was born February 25, 1942 in Massachusetts to Amy and Pearl St. Lawrence and passed away March 4, 2022 in Salem, Missouri at the age of eighty years. Loretta was raised around Massachusetts and New Hampshire.... View Obituary & Service Information

The family of Loretta Mae (St. Lawrence) Champney created this Life Tributes page to make it easy to share your memories.

Send flowers to the Champney family.