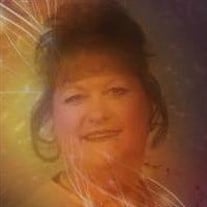 Lydia Jane McMullin was born December 31, 1954 in St. Louis, Missouri to James and Patsy McMullin and passed away May 16, 2019 in Fenton, Missouri at the age of sixty- four years. Lydia grew up in the St. Louis area where she attended school until she moved to the Boss/Bunker area at the age of fifteen. She worshipped at the local Baptist Church and was saved as a young girl. Lydia was married to the father of her children Garry Fred Pritchett for 8 years and to this union two children were born: Patsy Elaine (Pritchett) Brooks and Garry Fred Pritchett Jr. In her working years, Lydia was a seamstress for Angelica Uniform in St. Louis, Missouri where she made uniforms, hospital gowns and scrubs. She also worked as a manager of the local Motel 6 and was a previous member of the Eagle Club. Lydia enjoyed spending time in her garden and loved to sew, she could mend almost anything. She was a remarkable cook and enjoyed preparing meals for her family and friends. She was famous for her fried chicken and home made candies. Lydia adored her large family and loved spending time with them. Whether it be on a camping trip, fishing on the river or around the dining room table, she cherished her time spent with family. Preceding her in death was her mother: Patsy May McMullin, father: James Edward McMullin and brother: Georgie McMullin. Lydia is survived by three children: Patsy Brooks and husband Eddie of Cuba, MO and Garry Pritchett Jr. and wife Kimberly of Eminence, MO, Debra Nichols and husband Don of Winona, MO; two sisters: Leona Brooks and husband Bobby Sr. of Salem, MO and Sherrie Hutson and husband Scott of Springfield, MO; stepmother: Ruthann McMullin of Springfield, MO; three brothers: David Barton of Spokane, MO, Dennis Barton of Salem, MO and Randy Barton and wife Becky of Salem, MO; nine grandchildren; six great grandchildren and many nieces, nephews, relatives and friends. Lydia will be sadly and deeply missed, but fondly remembered by all those who knew and loved her. Funeral Service for Lydia Jane McMullin was held Sunday May 19, 2019 in the Wilson Mortuary Salem Chapel with Pastor Linda Skaggs officiating. The eulogy was shared by Sherrie Hutson and special music was provided by Lori Brooks and Linda Skaggs singing "Amazing Grace". Additional song selections were: "Save a Place for Me", "A Song for Mama" and "When I Get Where I'm Going". Serving as Honorary Pallbearers were Cody Brooks, Bobby Brooks Jr., Herbert McMullin, Jacob Brooks, Curtis Pritchett and Riley McMullin. Burial will be in the Westfork-Sutterfield Cemetery. All arrangements were under the direction and care of Wilson Mortuary of Salem.

Lydia Jane McMullin was born December 31, 1954 in St. Louis, Missouri to James and Patsy McMullin and passed away May 16, 2019 in Fenton, Missouri at the age of sixty- four years. Lydia grew up in the St. Louis area where she attended school... View Obituary & Service Information

The family of Lydia Jane McMullin created this Life Tributes page to make it easy to share your memories.

Send flowers to the McMullin family.