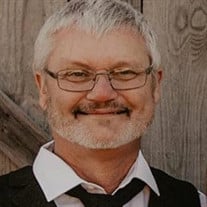 Marvin Lee Mathes was born August 30, 1964 in Salem, Missouri to Billy Gene and Glenna Marcella (Johnson) Mathes. He grew up in Viburnum, Missouri and graduated with the class of 1983 from Viburnum High School. Marvin furthered his education with Linn Technical College of Missouri and received his associates in Auto Mechanics. Marvin was united in marriage to the love of his life, Lori Kaye Stulce, June 30, 1990 in Boss, Missouri and shared together thirty-one years of laughter and memories. Marvin and Lori were blessed with two children: Patrick and Kayelee. Marvin worked hard all his life; he started his working career with Cominco on the Mine Rescue Team. He was a heavy equipment operator with K&D Crushing Inc. where he took pride in driving the trucks and blowing up rocks. Marvin was very courageous and volunteered with the fire department and for a time drove an ambulance as an EMT. He proudly owned and operated his own businesses, Mathes Sawmill and Mathes Trucking. Throughout his working career, he was able to gain many wonderful colleagues and friends and was a good business advisor to many. In his spare time, Marvin liked working with his hands and tinkering on vehicles. He truly enjoyed the outdoors and spending time hunting and fishing along with riding his motorcycle and four-wheeler. Playing cards with his friends was something he looked forward to, but most important to him was his family. He loved his children and adored his grandchildren and the memories they made together. Marvin was a great man of faith and highly involved with Macedonia United Baptist Church. He truly enjoyed fellowshipping with others and liked listening to old gospel music. His heart was tender and filled with compassion and mercy for everyone he encountered. Marvin departed this life February 4, 2022 in Salem, Missouri at the age of fifty-seven years. He leaves behind to cherish his memory, loving wife Lori Mathes of Viburnum, MO; son: Patrick Mathes and wife Samantha of Lesterville, MO; daughter: Kayelee Booker and husband John of Iowa; parents: Billy and Marcella Mathes of Boss, MO; grandchildren: Karsyn and Sadie; sister: Martha Mathes of Viburnum, MO; as well as a host of aunts, uncles, nieces, nephews, cousins, other relatives, and dear friends. Preceding him in death, his grandparents and several aunts and uncles. Marvin was one of a kind, full of character, and had a great sense of humor. He was well known for telling jokes and pranking others. The love he had for his family was evident to everyone around him. Marvin will forever be missed but never forgotten. Funeral Services for Marvin Lee Mathes were held Tuesday, February 8, 2022 in the Wilson Mortuary Viburnum Chapel with Pastor Bill Mathes and Pastor Adam Asher officiating. Special music was provided by Martha Mathes and Pat Connors. Serving as Pallbearers were Patrick Mathes, John Booker, Chris Boyle Jr., Ethan Boyle, Bailey Reuter, Gavin Reuter, Tom Miles, and Branson Dunlap. Honorary Pallbearer was Austin Boyle. Burial was in the Boss Cemetery. Arrangements were under the direction of Wilson Mortuary of Salem, Missouri. Online Condolences may be entered at www.wilsonmortuary.com

Marvin Lee Mathes was born August 30, 1964 in Salem, Missouri to Billy Gene and Glenna Marcella (Johnson) Mathes. He grew up in Viburnum, Missouri and graduated with the class of 1983 from Viburnum High School. Marvin furthered his education... View Obituary & Service Information

The family of Marvin Lee Mathes created this Life Tributes page to make it easy to share your memories.

Send flowers to the Mathes family.