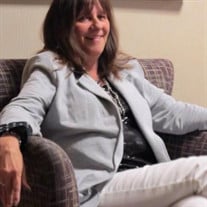 Mary Ann (Webber) Norris was born May 4, 1955 in Round Spring, Missouri to Feird Melton and Sally Rudy (Martin) Webber. She grew up in Eminence and graduated from Eminence High School. Mary Ann married the love of her life, Joe Norris, on May 15, 1974 in Salem by the Rev. Virgil Parker. Mary Ann and Joe were blessed with forty-seven years of marriage and three children, Amber, Carl, and Joe. In her younger years, Mary Ann worked at Hagale's Garment Factory in Salem, Missouri. She left her job when her children were born and was a devoted mother and proud homemaker. She was later employed at a T.G.&Y. Store, Wal-Mart, and Fostoria Glass at the Cherokee Trading Post all in El Reno, Oklahoma. Mary Ann loved to go on cruises and had many stories to tell from each of the five trips she went on. She was talented at making arts and crafts and made dollhouses. Mary Ann liked horses and was always ready to ride in her spare time. She loved bling and its sparkle and shine matched her big personality. Mary Ann was well known for her sweet character. Mary Ann was a lady of faith and attended Bethel Church. In later years, she and Joe enjoyed fellowship at New Harmony Church. She greatly enjoyed time spent with her family and treasured the memories made. Her grandchildren and great-grandchildren were her pride and joy. Mary Ann was a loving wife, proud mother, and doting grandmother. Mary Ann departed this life on October 11, 2021 in Tulsa, Oklahoma at the age of sixty-six years. She leaves behind to cherish her memories, loving husband Joe Norris of the home; children: Amber Kettelhake and husband Michael of Salem, MO, Carl Norris and wife Amy of Vian, OK, Joe Norris and wife Whitney of Tuttle, OK; grandchildren: Ashly, Kasandra, Kristina, Abigail, Nicole, Brandon, Sharon, Christopher, Jason, Nathainel, Aurora, Skyler, Thomas, JaQuetta, Jazmin, Tanner, Hunter, Austin, Rainey, Azlynn, Chase, Joey, Kayli, Zeylah, and Pixie; great-grandchildren: Chelsea, Makenzee, Silas, Daisy, Oliver, Hailey, May, Carson, Raphael, Cassius, Isaiah, Sahara, Gregory, Lyle, Eligh, and Isabelle; brothers: Bobby Webber and wife Linda of Salem, MO, and Fred Webber of Eufala, OK; sister: Elizabeth Prater and husband Don of Salem, MO; as well as a host of nieces, nephews, other relatives and friends. Preceding her in death, parents: Feird and Rudy Webber; brother: Sonny Webber; and sister: Christine Webber. Mary Ann was beautiful inside and out. She will be deeply missed by everyone who knew and loved her. Funeral Services for Mary Ann (Webber) Norris were held Saturday, October 11, 2021 in the Wilson Mortuary Salem Chapel with Rick Mansfield officiating. Special music was provided by Roy and David Light. Serving as Pallbearers and Honorary Pallbearers were Hunter Norris, Austin Norris, Tanner Norris, Joey Norris, Chase Norris, Nathainel Melton, Chris Prater, Thomas Melton, and Buck Prater. Burial was in the Weese Cemetery in Shannon County, Missouri. Arrangements were under the direction of Wilson Mortuary of Salem, Missouri. Memorial Contributions may be made in memory of Mary Ann Norris and left at Wilson Mortuary. Online Condolences may be entered at www.wilsonmortuary.com

Mary Ann (Webber) Norris was born May 4, 1955 in Round Spring, Missouri to Feird Melton and Sally Rudy (Martin) Webber. She grew up in Eminence and graduated from Eminence High School. Mary Ann married the love of her life, Joe Norris, on May... View Obituary & Service Information

The family of Mary Ann (Webber) Norris created this Life Tributes page to make it easy to share your memories.

Send flowers to the Norris family.