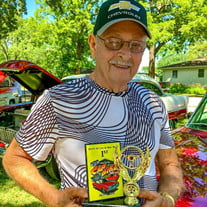 Michael “Mike” Harold Bequette Sr. was born February 27, 1937 in Richwoods, Missouri to Amos Stephen and Minnie Virginia (Pratt) Bequette. He grew up in Valley Park, Missouri and graduated with the class of 1955 from Valley Park High School. After graduation, Mike enlisted into the United States Army and served his country faithfully until his honorable discharge. Mike was united in marriage to the love of his life, Sue Anna McDaniels, January 30, 1959. This union was blessed with two children: Gale and Michael Jr. Mike and Sue shared together thirty-seven years of memories before her passing December 1, 1996. He later married his sweetheart, Doris Kay “DK” Phillips October 17, 1998. They were blessed with twenty-three years of laughter and memories. Mike was a dedicated worker, he was employed with both Amax and the Doe Run Lead Companies and worked hard throughout the years. Before retiring, Mike climbed his way to a manager/supervisor position. He was also employed as an engineer with Hussmann Refrigeration. Mike was a successful businessman owning several laundromats and Mike’s Bait Shop. During that time he enjoyed visiting with those who came in and serving the community. Mike was an avid golfer and could be found often on the Spring Creek Golf Course, at times even with his fur baby, Scooter. He liked to enjoy what nature provided, admire the wildflowers, and travel to the beach. In his younger years, Mike enjoyed hunting and fishing. Mike was a car enthusiast, a member of the Current River Cruisers Car Club, and loved showing off his 1963 Chevy Impala Super Sport. Mike was a great man of faith and highly involved with Salem Full Gospel Church. He was a longtime member who served on the board, organized several bus tours, played on the bowling league, attended men’s breakfast, and truly enjoyed fellowshipping with others. His heart was tender and filled with kindness, compassion, and mercy for everyone he encountered. Mike departed this life February 16, 2022 at St. Luke’s Hospital in Chesterfield, Missouri at the age of eighty-four years. He leaves behind to cherish his memory, loving wife: D.K. Bequette of Salem, MO; two children: Gale Huffman and husband Bill of Salem, MO, Mike Bequette Jr. and wife Stacy of Imperial, MO; three grandchildren: Jon Huffman, Julie Huffman Beaman and husband Tim, VaLynda Huffman Carter and husband Justin; one great grandchild: Brynn Beaman; brothers: Delmar Bequette and wife Sarah of Illinois, Jim Bequette and wife Mary Lou of Nevada, Lynn Bequette and Marlene of Missouri, and Ann Bequette wife of Glenwood; as well as a host of nieces, nephews, other relatives, and dear friends. Preceding him in death, first wife: Sue Bequette; parents: Amos and Minnie Bequette; brothers: Tony, Ted, and Glenwood Bequette. The love and devotion Mike had for his family was evident to all that knew him. His greatest joy was spending time with his family and making memories with his grandchildren and great-grandchild. His legacy will live on in those who loved him most. Mike will forever be missed but never forgotten. Funeral Services for Michael “Mike” Harold Bequette Sr. were held Monday, February 21, 2022 at Salem Full Gospel Church with Pastor Bill Stack and Gary Chilton officiating. Special Music was provided by Sheri Stack. Serving as Pallbearers were Jon Huffman, Julie Huffman Beaman, Tim Beaman, VaLynda Huff Carter, Justin Carter, and Brynn Beaman. Military Honors was provided by the Missouri Honors Team and American Legion Post 99. Burial was in the North Lawn Cemetery. Arrangements were under the direction of Wilson Mortuary of Salem, Missouri. In lieu of flowers, Memorial Contributions may be made in memory of Michael Bequette Sr. to Project Win Cancer Support and left at Wilson Mortuary. Online condolences may be entered at wilsonmortuary.com

Michael &#8220;Mike&#8221; Harold Bequette Sr. was born February 27, 1937 in Richwoods, Missouri to Amos Stephen and Minnie Virginia (Pratt) Bequette. He grew up in Valley Park, Missouri and graduated with the class of 1955 from Valley Park... View Obituary & Service Information

The family of Michael "Mike" Harold Bequette Sr. created this Life Tributes page to make it easy to share your memories.

Send flowers to the Bequette family.