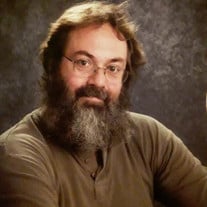 Michael Joseph Helm was born September 20, 1958, in St. Louis, Missouri to Roy and Bernardine (Slocum) Helm and passed away January 4, 2020, in Salem, Missouri at the age of sixty-one years. Michael spent most of his life in the St. Louis area. He was a man of many talents and a very hard worker. He began drawing and painting at an early age and was hired by several neighbors to do oil paintings by the time he was ten years old. In his pre-teen and teen years, Michael continued to work in oils and selling several of his projects. Michael's passion for art continued throughout his life. He worked at the Penniston Commercial Art Studio before becoming the Vice President of his own art studio, Helm Smith and Grimm, Inc. He worked for several years with ad agencies and large companies like Kellogg and Anheuser Busch. Michael was blessed with one daughter, Jessica Casey. He was a proud father who cherished her deeply and was blessed to have sixteen wonderful years of memories with her. On April 14, 2001, Michael was united in marriage to Barbara Ann Kerns, at the Bonebrake Center, and together they shared eleven years of marriage before her passing, November 21, 2010. He cherished the time spent with his family and was a father-like figure to his nieces and nephews. Michael moved to the Salem area in 1998 and has been a blessing to the community. He has created many murals and logos for local businesses, sets for plays, and has taught several art classes. He was a part of the Bigfoot Exhibit at Trees and Trains along with Santa's Workshop and has played Santa for many years. Michael has touched the lives of many; bringing joy and happiness to children of all ages. He enjoyed working at Salem R-80 as a paraprofessional. Michael was an incredible teacher, amazing artist and was well-loved by the students and staff there. Michael was strong in his faith and attended several local churches. He enjoyed the worship and the opportunity to sing. Michael was a part of the Spring Creek Artisans, Arts Rolla, and Salem Area Community Betterment Association. Michael is survived by his siblings: Joseph Helm of Caseyville, IL, Mary Helm of Carrollton, IL, John Helm and wife Stephanie of Arnold, MO, Rose Henry of St. James, MO, and Gerard Helm of St. Louis, MO; as well as numerous nieces, nephews, extended family and friends. Preceding him in death were his wife: Barbara Helm; daughter: Jessica Casey and parents: Roy and Bernardine Helm. Michael was one of a kind and will be remembered for his testimony of kindness and giving. He will be fondly remembered by all who knew and loved him. Celebration of Life for Michael Joseph Helm was held Saturday, January 10, 2020 in the Wilson Mortuary Salem Chapel with Pastor Rocky Lindley officiating. Song selections played were "Saying Goodbye" from the Muppets Take Manhattan, "The Prayer", and "Home to Stay". All arrangements were under the direction of Wilson Mortuary of Salem, Missouri.

Michael Joseph Helm was born September 20, 1958, in St. Louis, Missouri to Roy and Bernardine (Slocum) Helm and passed away January 4, 2020, in Salem, Missouri at the age of sixty-one years. Michael spent most of his life in the St. Louis area.... View Obituary & Service Information

The family of Michael Joseph Helm created this Life Tributes page to make it easy to share your memories.

Send flowers to the Helm family.