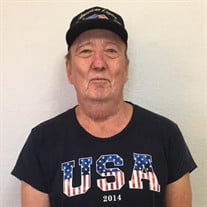 Michael Douglas "Mike" Brewer was born July 21, 1947 in Muscatine, Iowa to William and Mary Jane (Broemser) Brewer and passed away December 8, 2018 in Salem, Missouri at the age of seventy-one years. Mike was born and raised in Muscatine, Iowa. He faithfully and honorably served in the United States Army. On December 23, 1993, Mike and Carolyn were united in marriage in Salem, Missouri. Mike always had an entrepreneurial spirit. Before moving to Missouri, he owned a fishing shop. When Mike moved to Missouri, he worked in the mines, and later opened a retail store in Salem. He was proud of his "Teddy Bear Shop". Many of his friends and customers lovingly referred to him as "Bear". Mike enjoyed the river and spending time at his family cabin in Muscatine, Iowa. He also loved animals and took special care of all his pets. Mike was a proud member of the American Legion. Preceding him in death were his parents, William and Mary Jane Brewer. Survivors include his wife, Carolyn Brewer of the home in Salem, MO; daughter, Amy Linson and husband, Fred of Rolla, MO; stepson, Donnie Bell of Salem, MO; sister, Betty "Arlene" Nesham and husband, Darell of Muscatine, IA; grandsons, Devin, William, and Bently Linson; granddaughters, Hope Bell, Mahayla Breckner, and Jenna; great granddaughter, Lilia Marie Bell; and special friend, Jim Chafin. Mike will be fondly remembered and greatly missed by all who knew and loved him. Memorial service for Michael Douglas Brewer was held Saturday, December 15, 2018 at Wilson Mortuary Salem Chapel with Pastor Paul Davis officiating, special recorded selections were played, followed by Full Military Honors.

Michael Douglas "Mike" Brewer was born July 21, 1947 in Muscatine, Iowa to William and Mary Jane (Broemser) Brewer and passed away December 8, 2018 in Salem, Missouri at the age of seventy-one years. Mike was born and raised in Muscatine,... View Obituary & Service Information

The family of Michael "Mike" Douglas Brewer created this Life Tributes page to make it easy to share your memories.

Send flowers to the Brewer family.