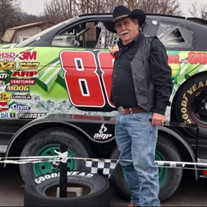 Michael “Mike” Wayne Tredway was born on August 25, 1959 to Paul and Retha Jean (Lowe) Tredway in Union, Missouri and passed away on January 5, 2021 in Walnut Grove, Missouri at the age of sixty-one years. Mike grew up in Owensville, Missouri and graduated with the Class of 1978 from Owensville High School. He met his sweetheart, Holly Hendrick in May 2001 and together shared nearly twenty years of memories. Mike was a loving father and stepfather of his children: Austin, Amanda, Misty, Nikki, Alex, Andrew, and Zack. Mike was a hard worker and spent over forty years as an over-the-road truck driver; driving coast to coast and meeting new people along the way. When he wasn’t on the road, he was in the garage working on cars and tinkering with his race car. Mike enjoyed dirt track racing and was an avid motorcyclist. Mike’s talents didn’t stop with cars and trucks. He was quite accomplished at playing the guitar, banjo, mandolin, and a bit with the fiddle. He could pick out a tune on the piano and most recently had taken up the drums. Mike had a talented voice and enjoyed singing, Johnny Cash and George Jones were his favorites. Mike was a man of faith and loved the Lord. His family was most important to him and he valued spending time together and making memories. Mike was proud of his children and treasured his grandchildren. Mike is survived by, life partner: Holly Hendrick of the home; children: Austin Tredway and wife Cassidy, Amanda Tredway, Misty Cox and husband Ed, Nikki Hendrick, Alex Hendrick, and Andrew Hendrick; father: Paul Tredway and wife Rosie; sisters: Sarah Benton and husband Richard, Tammy Shrum and husband Shawn, Etta Garth and husband Tony, and Paula Tredway; many grandchildren; as well as a host of nieces, nephews, other relatives, and friends. Preceding him in death, son: Zack Tredway; mother: Retha Counts; and sister: Maggie Sue Asbridge. Mike will be forever missed by all who knew and loved him. Memorial Contributions may be made in memory Mike Tredway to Wilson Mortuary and left at Wilson Mortuary. Online condolences may be entered at wilsonmortuary.com

Michael &#8220;Mike&#8221; Wayne Tredway was born on August 25, 1959 to Paul and Retha Jean (Lowe) Tredway in Union, Missouri and passed away on January 5, 2021 in Walnut Grove, Missouri at the age of sixty-one years. Mike grew up in Owensville,... View Obituary & Service Information

The family of Michael "Mike" Wayne Tredway created this Life Tributes page to make it easy to share your memories.

Send flowers to the Tredway family.