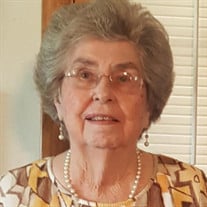 Mildred June (Hasten) Smith was born on June 15, 1932 in Dent County, Missouri to Harl and Mildred (Stephens) Hasten and passed away on September 24, 2020 at the Heartland Care & Rehab Center in Cape Girardeau, Missouri at the age of eighty-eight years. June grew up and attended school in the New Hope Community. It was while in school she met the love of her life, Earl Dean Smith. On May 20, 1950, June and Earl were united in marriage and shared sixty-eight years of memories before his passing November 2, 2018. They were blessed with four sons: Steve, Lindell, Bryan, and Kevin and one daughter: Lois. June was devoted to her family and took great pride in being a dedicated mother to her children. She was a partner with her husband in the family businesses, Smith Excavating, Construction, and Trucking as well as Smith Limestone Quarry. June was responsible for doing the bookwork and was a friendly voice on the phone. June was a great woman of faith. She was baptized at a young age and was a longtime member of New Hope Cumberland Presbyterian Church. June was an avid antique glass collector; her favorite pieces were the depression glass. She enjoyed spending time in her flower garden and watching the hummingbirds. Most important to June was her family, she loved the holidays; especially Christmas. June was one of the best grandmothers around and cherished the memories made with her grandchildren, great-grandchildren, and great-great-grandchildren. June is survived by four loving sons: Steve Smith and wife Ginger of Salem, MO, Lindell Smith and girlfriend Wendy of Salem, MO, Bryan Smith and wife Rebecca of Salem, MO, Kevin Smith and wife Cheryl of Jackson, MO; one sister: Corda Reeves and husband Dewayne; one brother: Corbin Hasten and wife Diana; one sister-in-law: Mable Smith; one brother-in-law: Elva Gorman; nine grandchildren: Timothy, Sarah, Krystal, Tyler, Morgan, Dalton, Mandi, Joni, and Randy; great-grandchildren: Jake, Logan, Dawson, Micah, Bryar, Aryssa, David, Waylon, Colton, Carter, Bella, Chase, Trey, Bryce, Rhett, Hadlynn, and Lawson; great-great-grandchildren: Addi Jo and Abel extended family and friends. Preceding her in death, her husband: Earl Dean Smith; parents: Harl and Mildred Hasten; daughter: Lois Diane Smith; father and mother-in-law, sister-in-law: Marlene Smith Gorman and brother-in-law: David Smith. June was a sweet lady who will be fondly remembered but deeply missed by all those who knew and loved her. Funeral Services for Mildred June Smith were held Monday, September 28, 2020 in the Wilson Mortuary Salem chapel with Pastor Larry Nash officiating. Song selections played were “Old Rugged Cross” and “How Great Thou Art”. Serving as Pallbearers were Timothy Smith, Dalton Smith, Dawson Conway, Jarrod Simpson, Jared Nothaus, Ross Hanners, Dillon Hasten, and Ryan Reeves. Honorary Pallbearers were Randy Partin and Tyler Smith. Burial was in the New Hope Cemetery. The Family was served by Wilson Mortuary of Salem, Missouri. Memorial Contributions may be made in memory of Mildred June Smith to Autism Speaks and left at Wilson Mortuary Online condolences maybe made at www.wilsonmortuary.com

Mildred June (Hasten) Smith was born on June 15, 1932 in Dent County, Missouri to Harl and Mildred (Stephens) Hasten and passed away on September 24, 2020 at the Heartland Care & Rehab Center in Cape Girardeau, Missouri at the age of eighty-eight... View Obituary & Service Information

The family of Mildred June (Hasten) Smith created this Life Tributes page to make it easy to share your memories.