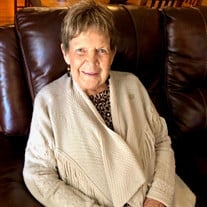 Minnie Ilene (Leonard) Mathes was born on October 4, 1937, in Lecoma, Missouri to Marvin and Thelma (Chapman) Leonard. She graduated from Salem High School, went to further her education obtaining her LPN license, and worked at SMDH for three years. Minnie was united in marriage to the love of her life, Bob Mathes, on March 23, 1955 and together shared sixty-five years of memories and were blessed with four children: Pam, Mark, Gary, and Christy. Minnie was always smiling and loved serving people. She worked at Salem R-80 as a cook for several years, bringing smiles and hugs to the students, and retired from the Viburnum Post Office after eighteen years of service. Minnie knew the value of hard work and worked hard to provide and care for her family. Minnie was one of a kind, with a heart of gold and gentle kindred spirit, always encouraging others. She was a faithful and serving member of the New Harmony United Baptist Church in Boss before moving her membership to the First Baptist Church Salem. Minnie was a precious godly woman who loved the Lord and attended Crossway Baptist Church in Springfield. Minnie’s love for the Lord was evident to those around her. She was a remarkable woman who enjoyed singing and listening to gospel music. Minnie was a Past Worthy Matron in the Salem Order of Eastern Star and former Girl Scout Leader. Minnie loved spending time in the kitchen baking, she was best known for her raisin cream pies. She could be found bird watching, enjoying her flower beds, doing a crossword puzzle, or playing Candy Crush. Minnie and Bob liked to travel; they often camped at Montauk and were snowbirds in Florida. Most important to Minnie was her family, especially her grandchildren and great-grandchildren. She cherished her time spent with them creating memories and teaching them how to love others. Minnie went to be with her Lord on September 1, 2020, at the age of eighty-two years. She leaves to cherish her memory, her loving husband: Bob Mathes of Springfield, MO; four children: Pam Sutterfield and husband Dan of Springfield, MO, Mark Mathes and wife Leisa of Springfield, MO, Gary Mathes and wife Ginger of Kansas City, MO, Christy Bryant and husband Steve of Rolla, MO; siblings: Faye Widener, June Presley, Marvin "Junior" Leonard and wife Darleen, and Shirley Helton; fourteen grandchildren: Scott Sutterfield and wife Teisha, Brad Sutterfield and wife Megan, David Sutterfield, Danny Sutterfield and wife Jannece, Travis Sutterfield and wife Carrie, Bobbi Reavis and husband Caleb, Chad Mathes and wife Jessica, Nicki Rogers and husband Jaron, Luke Mathes and wife Tara, Ashley Kerr, Jonathon Kerr and wife Christina, Luke Bryant, Seth Bryant and wife Tiffanie; twenty-eight great-grandchildren and two on the way; as well as many nieces, nephews, other relatives and friends. Preceding her in death were her parents: Marvin and Thelma Leonard; sisters: Betty Richardson and Verlee Joyce; and grandson: Mike Arts. Minnie was beautiful inside and out, she held a special place in many hearts, was dearly loved and will be deeply missed. Funeral Services for Minnie Ilene (Leonard) Mathes were held Saturday, September 5, 2020 at First Baptist Church Salem, Missouri with Russ Davidson, Eddie Bumpers, Chad Mathes, and Gary Mathes officiating. Special Music was provided by the Mathes Family, Larry Sherrill, Jannece Sutterfield, and Chris Rhodes. Serving as Pallbearers were Scott Sutterfield, Brad Sutterfield, David Sutterfield, Chad Mathes, Jonathon Kerr, and Luke Mathes. Honorary Pallbearer was Caleb Reavis. Burial was in the Boss Cemetery. Arrangements were under the direction of Wilson Mortuary of Salem, Missouri. Memorial Contributions may be made in memory of Minnie Mathes to the Baptist Bible Fellowship International and may be left at Wilson Mortuary. Online condolences maybe made at www.wilsonmortuary.com

Minnie Ilene (Leonard) Mathes was born on October 4, 1937, in Lecoma, Missouri to Marvin and Thelma (Chapman) Leonard. She graduated from Salem High School, went to further her education obtaining her LPN license, and worked at SMDH for three... View Obituary & Service Information

The family of Minnie Ilene (Leonard) Mathes created this Life Tributes page to make it easy to share your memories.

Send flowers to the Mathes family.