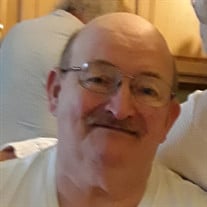 Mitchell Ray Patterson was born September 14, 1952 in Piggott, Arkansas and passed away March 17, 2019 in the Mercy South Hospital of St. Louis, Missouri at the age of sixty-six years. Mitchell grew up in Eureka, Missouri and graduated from Eureka High School. On February 23, 1980 in Brentwood, Missouri, Mitchell was united in marriage to Bertha May Hicks and they share four children; Travis, Timmothy, Joseph and Christine. Mitchell worked for thirty years as a plumber and was also a union worker. He was a member of Walking Faith Ministries and a man of strong faith. He enjoyed spending time with his Lord and Savior in Bible Study. He also enjoyed being able to help with Church projects. In his spare time Mitchell loved to garden and spend time with his dogs. Preceding him in death were his parents; Howard and Betty Rodgers; brothers, Cameron Rodgers and Donald Rodgers; and grandson, Dillon Thompson. Mitchell is survived by his loving wife, Bertha Patterson of the home in Salem; three sons, Travis Thompson and wife, Melanie of Washington, MO; Timmothy Thompson of St. Louis, MO; and Joseph Thompson and wife, Jerry of Gray Summit, MO; one daughter, Christine Levall and husband, Jerrod of Salem, MO; four brothers, Bryant Rodgers and wife, Sonia; Leonard Rodgers and wife, Kay; Marty Rodgers; and Bill Patterson; three sisters, Mary Kourik and husband, Erwin; Amy Ailabouni and husband, Tom; and Lavada Rodgers and special friend, Tim Emmons; seventeen grandchildren and two great grandchildren. Mitchell was truly a friend to everyone and will be sadly and deeply missed, but fondly remembered by all those who knew and loved him. Funeral service for Mitchell Patterson was held Wednesday, March 20, 2019 at the Wilson Mortuary Salem Chapel with Bro. Lyndell Decker officiating. Special music was played, "In The Garden", "Glory to His Name" ,"Go Rest High", Daddy Hands" and "He Didn't Have To Be" Serving as Pallbearers were Jai Thompson, Colton Thompson, Austin Hall, Logan Hall, Kenny Thompson and Timmy Russell. Interment was in the Cedar Grove Cemetery in Salem, Missouri. All arrangements under the care and direction of Wilson Mortuary of Salem.

Mitchell Ray Patterson was born September 14, 1952 in Piggott, Arkansas and passed away March 17, 2019 in the Mercy South Hospital of St. Louis, Missouri at the age of sixty-six years. Mitchell grew up in Eureka, Missouri and graduated from... View Obituary & Service Information

The family of Mitchell Ray Patterson created this Life Tributes page to make it easy to share your memories.

Send flowers to the Patterson family.