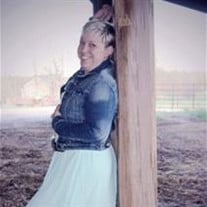 Nikki Paulette (Warren) Watson was born on September 16, 1979 in Houston, Missouri to Carl and Susie (Gates) Warren and passed away on February 16, 2019 at her home in Salem, Missouri at the age of thirty-nine years. Nikki grew up and attended school at Eminence High; she graduated with the Class of 1997. At a young age Nikki was saved at the Baptist Church in Eminence, MO and eventually became a member of Dent County House of Prayer. On June 7, 2008, in Salem, Missouri Nikki was united in marriage to Dannie "Ryan" Watson and the two shared a son, Dakota. Nikki spent a few years as an Investigator of Children's Division in Rolla, Missouri, but most of all she enjoyed breeding dogs. Nikki loved spending time with family and friends whether it was at the river or around a bonfire. She also enjoyed time with her cats, dogs and horses. Most of all Nikki loved spending time with her husband. Ryan was her rock. Nikki loved being a mother to Dakota, she was so proud of the young man he was becoming. Preceding her in death were grandparents, Utah Carl Warren and wife Mabel Irene Warren along with Grandfather Bud Gant. Survivors include her husband Dannie "Ryan" Watson of Salem, MO; one son: Dakota Watson of the home. Father: Carl Warren and his wife Susan of Eminence, MO. Mother: Susan Gates of Eminence, MO. One sister: Carli Warren of Eminence, MO. Two brothers: Darrell O'Neail and James O'Neail of Eminence, MO. Grandmother: Pauline Gant of Eminence, MO. Father and Mother In Law: Dannie and Linda Watson of Salem, MO. And many other relatives and dear friends. Nikki will be sadly and deeply missed, but fondly remembered by all those who knew and loved her. Funeral Service for Nikki Paulette Watson was held Wednesday, February 20, 2019 at the Wilson Mortuary Salem Chapel with Pastor Everett Enloe officiating. Special Music played was: "Victory in Jesus", Castle on the Hill", "In the Garden", "Clear as Day" and a Special Tribute from Nikki to Ryan "The Time of My Life". Serving as Pallbearers were Koty Thomlinson, Kenny Thomlinson, Darrell O'Neail, Christopher Rocoberto, Dakota Watson and Steve Watson. Honorary Pallbearers were Dannie Watson and Curtis Warren. Interment was in the Pilgrims Rest Cemetery in Timber, Missouri. All arrangements were under the care and direction of Wilson Mortuary.

Nikki Paulette (Warren) Watson was born on September 16, 1979 in Houston, Missouri to Carl and Susie (Gates) Warren and passed away on February 16, 2019 at her home in Salem, Missouri at the age of thirty-nine years. Nikki grew up and attended... View Obituary & Service Information

The family of Nikki Paulette (Warren) Watson created this Life Tributes page to make it easy to share your memories.