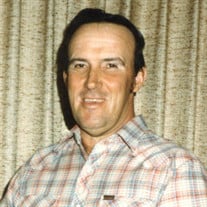 Noal Gay Kerr was born on May 14, 1937, in Brushy, Missouri. He was a twin and one of six sons born to Frank and Myrtle (Shaw) Kerr. Noal grew up and attended school in Salem, Missouri. Shortly after his schooling, he joined the Army National Guard and served his country faithfully until his honorable discharge. Noal was united in marriage to Bonnie Juanita Biggs on October 14, 1982 and together they shared nearly thirty-eight years of marriage before her passing on October 7, 2020. Noal and Bonnie were blessed to share eight children: Lois Ann, Stanley, Larry, Cecil, Noal, Gary, Jack, and Tony. Noal worked hard to provide for his family, he was employed for thirty years with the Floyd Charcoal Plant and worked his way up to a supervisor position. In his spare time, he enjoyed being outdoors deer hunting and working in the yard. Noal had a green thumb and like to grow vegetables in his garden. Noal was truly devoted to Bonnie and loved spending time with her in the kitchen. She would cook and bake, and he would clean up and wash the dishes. Most important to him was his family, he loved his children and cherished the memories made with them and treasured his grandchildren, great-grandchildren, and great-great-grandchildren. Noal was a man of faith and longtime member of Freewill Baptist Church Salem where he served as deacon for many years. Noal passed away on July 17, 2021, in Salem, Missouri at the age of eighty-four years. He leaves behind to cherish his memories, his loving children: Gary Kerr and wife Crystal of Salem, MO, Jack Kerr and wife Shelly of Salem, MO, Tony Kerr of Branson, MO, Stan Medlock and wife Sherry of Bunker, MO, and Lois Ann Tyler and Shawn of Salem, MO; twin brother: Loal Kerr and wife Sally of Salem, MO; sister-in-law: Lena Kerr of Salem, MO; as well as many grandchildren, great-grandchildren, great-great-grandchildren, nieces, nephews, other relatives and friends. Preceding him in death were, his wife Bonnie Kerr; parents: Frank and Myrtle Kerr; and brothers: Raymond, Delmar, Devern, and Leroy Kerr. Noal will be remembered for his sense of humor and love he had for his family and friends. He will be forever remembered and deeply missed. Funeral Services for Noal Gay Kerr were held Wednesday, July 21, 2021 in the Wilson Mortuary Salem Chapel with Pastor Charlie Bacon Jr. officiating. Song selections played were “Precious Memories” and “Drinking From A Saucer”. Serving as Pallbearers were Garrick Kerr, Andrew Medlock, Mike Kerr, Danny Kerr, Phoenix Canaday, Michael Canaday, Tony Kerr, and Steve Kerr. Honorary Pallbearers were Jackson Morris and Jonathan Kerr. Burial was in the Jadwin Cemetery. Arrangements were under the direction of Wilson Mortuary of Salem, Missouri. Memorial Contributions may be made in memory of Noal Kerr to the Freewill Baptist Church of Salem and left at Wilson Mortuary. Online condolences may be entered at wilsonmortuary.com

Noal Gay Kerr was born on May 14, 1937, in Brushy, Missouri. He was a twin and one of six sons born to Frank and Myrtle (Shaw) Kerr. Noal grew up and attended school in Salem, Missouri. Shortly after his schooling, he joined the Army National... View Obituary & Service Information

The family of Noal Gay Kerr created this Life Tributes page to make it easy to share your memories.

Send flowers to the Kerr family.