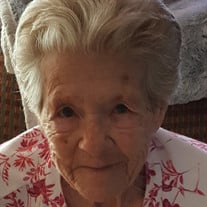 Norma Irene (Dotson) Prater was born on September 18, 1939, in Iron County, Missouri to William and Julia (Medley) Dotson. She was one of eighteen children and grew up in the holler of Bixby, Missouri. Norma was united in marriage to William Copeland, on April 11, 1959 and to this union blessed with five children: Charlotte, Joseph, Julia, Ronnie, and Carla. She later married her sweetheart, Roy Edward Prater, on October 17, 1998 in Viburnum and shared together twenty-two years before his passing February 28, 2020. Norma was a hard worker and for many years worked as a Certified Nurse Assistant at Belleview Valley Nursing Home. She was a go getter, loved to cook, and operated a catering business for several years. Her family enjoyed most her chicken and dumplings and delicious meatloaf. Norma liked spending time outdoors tending to her hummingbird feeders, garden, and flower beds. She had a love for animals and was passionate about her chickens. Most important to her was her family, she valued spending time with them and cherished the memories made together. Norma adored her grandchildren and treasured her great-grandchildren. Norma departed this life on May 26, 2022, at Phelps Health in Rolla, Missouri at the age of eighty-two years. She leaves behind her loving children: Charlotte Roach and husband Keith of Fredericktown, MO, Joe Copeland of Viburnum, MO, and Ron Copeland and wife Chris of Bixby, MO, siblings: Robert Dotson and wife Marcella of Bixby, MO, Billy Joe Dotson and wife Grace of Steelville, MO, Rick Dotson and wife Bonnie of Bixby, MO, Clinton Dotson and wife Sherry of Bixby, MO, Stanley Dotson and wife Carren of Bixby, MO, Fern Jones of Farmington, MO, and Anna June Dotson of Louisiana, MO; a host of grandchildren and great-grandchildren; as well as many nieces, nephews, other relatives, and dear friends. Preceding her in death were, her loving husband: Ed Prater; daughters: Julia Mae Hadley and Carla Jean Parks; her parents: William and Julia Dotson; and several siblings. Norma was known as a “busy bee”, she was always on the go, spending time with her family and friends. Her memory will live on in those who loved her most. Funeral Services for Norma Irene (Dotson) Prater were held Sunday, May 29, 2022 in the Wilson Mortuary Viburnum Chapel with Pastor Bill Mathes officiating. Song selections played were “Pretty Green Hills”, “Go Rest High On That Mountain”, “Dancing In The Sky”, and “Amazing Grace”. Serving as Pallbearers were Rick Dotson, Clinton Dotson, Tyler Dennison, Keith Roach, Kenny Sumpter, and David Carter. Honorary Pallbearers were Danny Ryan and Thomas Roach. Burial was in the Dotson Cemetery, Bixby, Missouri. Arrangements were under the direction of Wilson Mortuary of Viburnum, Missouri. Online condolences may be entered at www.wilsonmortuary.com

Norma Irene (Dotson) Prater was born on September 18, 1939, in Iron County, Missouri to William and Julia (Medley) Dotson. She was one of eighteen children and grew up in the holler of Bixby, Missouri. Norma was united in marriage to William... View Obituary & Service Information

The family of Norma Irene (Dotson) Prater created this Life Tributes page to make it easy to share your memories.

Send flowers to the Prater family.