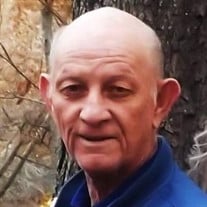 Nick Charles Smith was born August 13, 1950 in Etowah, Arkansas to Clarence Gilbert and Oneal Loletia (Long) Smith and passed away April 1, 2019 in the Evelyn's House of St. Louis, Missouri at the age of sixty-eight years. Nick went to Clover Bend School in Clover Bend, Arkansas. Through his teenage years, he lived in Hoxie, Arkansas. His parents, Clarence and Loletia Smith were share croppers and moved from farm to farm. Nick would tell stories of his parents and all the children picking cotton and loved raising chickens. On August 28, 1968, Nick was united in marriage to Sandra Kay Girard and to this union four daughters were born, Angela, Veronica, Yvette, and Brittany. As newlyweds, they nicknamed each other. Nick nicknamed Sandra "Pocahontas" and she picked "Funny Face" for Nick. Theirs was a love story for the ages. They have been married for 51 years. Nick and Sandra loved and supported each other thru the ups and downs of life. Nick's first job was at Deep Rock Gas Station which he started at 15 years of age. From there he worked at Brinkley's Tire in Pocahontas, Arkansas and was employed there for 17 years. He then went to work at Carl's Tire in Park Hills, Missouri for many years and also worked for Dewayne's Tire in Salem for several years. However, Nick's main passion in life was pastoring. At 22 years of age, he accepted Christ as his Savior and from that point on church and serving God was his life. At age 26, he started pastoring his first church in Hamil, Arkansas. He then left Arkansas and moved his family to Oklahoma where he pastored an Independent Pentecostal Church. Nick opened a mission church in Doniphan, Missouri and worked to build a church there. From there, the family moved to Potosi and pastored the Potosi Pentecostal Church of God. Nick also pastored Faith Assembly in Ozark, Arkansas then moved back to Missouri and took a church in Fredericktown. The next move was to Salem where he was honored to pastor Salem Pentecostal Church of God for 21 years. He loved his church family deeply and felt so honored and humbled to have had the opportunity to serve at the churches he pastored. Nick was a member of Salem Pentecostal Church of God and belonged to the Pentecostal Church of God Organization for 45 years. Nick loved to sing with his daughters. He enjoyed going on drives with his precious wife, Sandra. He restored old vehicles and painting them. He was a family man and didn't pass up an opportunity to go on outings with his family and spending the holidays cooking with his sons in law. Preceding him in death were his parents, Clarence and Loletia Smith; and his oldest brother, Jimmy Cockrane. Nick is survived by his loving wife, Sandra Smith of the home in Salem, MO; four daughters, Angela Denise Hill and husband, Marty of Kimberling City, MO, Veronica Yvonne Lato and husband, Joe of Salem, MO, Yvette Marie Smith and husband, Troy of Bonne Terre, MO, Brittany Renee Miller and husband, Dustin of Rolla, MO; one sister, Barbara Moore of Jonesboro, AR; two brothers, Sam Smith of Pocahontas, AR, and Gilbert Smith of Imboden, AR; grandchildren, Dakota Richard and wife, Carly of Kimberling City, MO, Austin Hill of Kimberling City, MO, TJ Smith of Bonne Terre, MO, Allie Lato of Salem, MO, Mariah Miller of Rolla, MO, and three Loved Babies; one great granddaughter, Lynix Richards of Kimberling City, MO; extended family and friends. Nick will be sadly and deeply missed, but fondly remembered by all those who knew and loved him. Funeral service for Pastor Nick Smith was held Friday, April 5, 2019 at the Wilson Mortuary Salem Chapel with Bishop Bob McGee and Pastor Paul Davis officiating. Special music was provided by Don Stiles singing "Out of Darkness into Light" and Leizl Taylor singing "Amazing Grace, My Chains are Gone". Serving as pallbearers were Troy Smith, Marty Hill, Joe Lato III, Dustin Miller, Dakota Richards and Austin Hill. Interment was in the Boss Cemetery of Boss Missouri. All arrangements under the direction and care of Wilson Mortuary of Salem.

Nick Charles Smith was born August 13, 1950 in Etowah, Arkansas to Clarence Gilbert and Oneal Loletia (Long) Smith and passed away April 1, 2019 in the Evelyn's House of St. Louis, Missouri at the age of sixty-eight years. Nick went to Clover... View Obituary & Service Information

The family of Pastor Nick Charles Smith created this Life Tributes page to make it easy to share your memories.