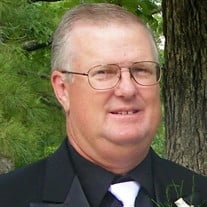 Paul Wayne Camden Jr. was born September 7, 1960 in Jefferson City, Missouri to Paul Sr. and Shirley (Flippin) Camden. In his younger years, Paul moved around a lot due to his father’s job. He was raised throughout; St. Charles, Chicago, La Grange, and in Tennessee. His family moved back to Salem in 1973 and made this community their home. Paul graduated from Salem High School with the Class of 1978. Paul married his sweetheart, Christina “Tina” Schafer on June 17, 1989 and together shared thirty-two years of marriage. Paul and Tina were blessed with two sons: Klay and Dustin. Paul was a hard-working man who worked hard to provide for his family. From 1987 until 2001, Paul served as a firefighter with the Warrensburg Fire Department. He had a passion for the community and thoroughly enjoyed serving for fifteen years. Until his retirement in 2018, Paul worked as a heavy equipment operator. He enjoyed running his excavator and other equipment Paul was an avid Kansas City Chiefs Fan. He had a talented hand for woodworking and wasn't afraid of a new project of any kind, to include furniture, cabinets, and shelves. He had a passion for restoring old vehicles and building scaled heavy equipment models was a lifelong hobby of his. Paul was a remarkable man who loved his family and would do anything for them. He was a devoted and dedicated husband, amazing father, and a loving and doting papaw. His family was most important to him and he treasured the time spent together, especially with his grandchildren. Paul departed this life on August 12, 2021 in Rolla, Missouri at the age of sixty years. He leaves behind to cherish his memories, loving wife: Tina of the home; sons: Klay Camden and wife Shauna of Salem, MO, Dustin Camden and fiancé Alyssa Carnelison of Kansas City, MO; grandchildren: Harley, Sawyer, and Parker Camden all of Salem, MO; sister: Terrie Welch and husband Chris of Salem, MO; mother-in-law: June Schafer of Salem, MO; brothers-in-law and sisters-in-law: Bill Schafer and wife Sharon, Carolyn Kunkel and husband Leroy, Roger Schafer and wife Patty, Tammy Westerman and husband Joe, and Tim Schafer and wife Lynetta all of Salem, MO; aunts: Barbara Miller of Columbia, MO, Janet Camden of Alma, AR; uncle Kenny Camden of St. Louis, MO; many nieces, nephews, extended relatives and friends. Preceding him in death, parents: Paul Sr. and Shirley Camden; father-in-law: Eugene Schafer; aunts and uncles. Paul will be remembered for his kind heart, friendly spirit, and contagious smile. He was loved by all who knew him and will be forever missed. In lieu of flowers, Memorial Contributions may be made in memory of Paul Camden Jr. to Love Pack Back Pack or charity of donors choice and left at Wilson Mortuary. Online Condolences may be entered at www.wilsonmortuary.com

Paul Wayne Camden Jr. was born September 7, 1960 in Jefferson City, Missouri to Paul Sr. and Shirley (Flippin) Camden. In his younger years, Paul moved around a lot due to his father&#8217;s job. He was raised throughout; St. Charles, Chicago,... View Obituary & Service Information

The family of Paul Wayne Camden Jr. created this Life Tributes page to make it easy to share your memories.