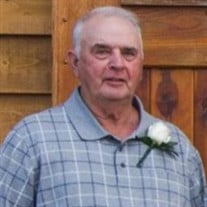 Paul Edward Fulton was born on October 16, 1942 to Thomas Daniel and Edna Jewel (Pender) Fulton in Kirkwood, Missouri and departed this life on January 20, 2021 in St. Louis, Missouri at the age of seventy-eight years. Paul grew up on the family farm in Dent County, Missouri and graduated with the Class of 1960 from O’Fallon Tech High School. He entered the United States Air Force and served his country faithfully until his honorable discharge. Paul was a faith-filled man and lifelong member of Salem Seventh Day Adventist Church. He was a devoted member who liked helping others and served as an Elder. Paul married his sweetheart, Violet Kay Counts on December 23, 1962 in Salem, Missouri and together shared fifty-eight years of memories. Paul and Violet were blessed with two children, Paula and Tim. Paul was a loving father and great example to everyone around him, the example he set for his family was hard to beat. Paul was a hard worker, honest, and well respected by everyone he met. In his early working years, he worked as an auto mechanic with Pines Chevrolet. Paul enjoyed working with his hands and was well known in the community for his custom-built homes and area churches. He was owner-operator of Fulton Construction and worked as a carpenter serving the Dent, Phelps, and Texas County communities. Paul took great pride in his work and built several homes for his family and friends until he retired at the age of seventy. While family was his greatest passion, he never missed an adventure. His zest for travel and deep love for scuba diving led him to travel and explore life’s wonders. Paul was a certified diver and shared his passion with his son and grandsons. Their favorite memories were in Hawaii and the Cayman Islands. Paul was an outdoors enthusiast and when not diving, he filled his adventurous spirit by boating, fishing, or hunting. Paul was a member of the NRA and held the black belt at Rolla Judo Club. Paul leaves behind to cherish his memories his loving wife Violet Fulton of the home; daughter: Paula Korinek and husband Chris of Incline Village, NV; son: Tim Fulton and wife Michelle of Salem, MO; grandchildren: Andy Fulton, Nick Fulton and wife Chelsie, and Jordan Fulton; sister: Jo Merritt of Salem, MO; brother: James Fulton of Salem, MO; as well as a host of nieces, nephews, cousins, other relatives, and friends. Preceding him in death, parents: Thomas and Jewel Fulton; sister: Ernestine Walker and husband Bill; brother-in-law: Dean Merritt; and sister-in-law: Charlene Fulton. Paul was deeply loved by his family and is leaving behind a lot of beautiful memories and a great legacy. Funeral Services for Paul Edward Fulton were held Saturday, February 6, 2021 in the Wilson Mortuary Salem Chapel with Pastor Kenneth Plank officiating. Special music was provided by Angie Micke and Brittany Smith singing “Farther Along” and “Amazing Grace”, and Casey Reed singing “Blessed Assurance”. Additional song selection played was “Will the Circle Be Unbroken”. Serving as Pallbearers were Travis Fulton Sr., Travis Fulton Jr., Roger Counts, Andy Fulton, Nick Fulton, and Jordan Fulton. Honorary Pallbearers were Bob Counts and James Fulton. Military Honors was provided by the United States Air Force and American Legion Post 99. Burial was in the Green Forest Cemetery. Arrangements were under the direction of Wilson Mortuary of Salem, Missouri.

Paul Edward Fulton was born on October 16, 1942 to Thomas Daniel and Edna Jewel (Pender) Fulton in Kirkwood, Missouri and departed this life on January 20, 2021 in St. Louis, Missouri at the age of seventy-eight years. Paul grew up on the family... View Obituary & Service Information

The family of Paul Edward Fulton created this Life Tributes page to make it easy to share your memories.

Send flowers to the Fulton family.