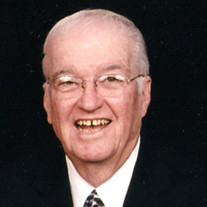 Paul "Tooter" Floyd Pryor was born November 2, 1925 in Boss, Missouri to James Solomon and Zola (Davis) Pryor and passed away March 5, 2020, at Salem Memorial District Hospital at the age of ninety-four years. Tooter grew up in Boss and at the age of twenty, he entered the United States Army where he served his country faithfully until his honorable discharge in 1946. On August 6, 1948, Tooter was united in marriage to the love of his life Wanda Woolf in Salem, Arkansas and together they shared sixty-eight wonderful years of marriage and were blessed with three children: Denny, Tina, and Michelle. Tooter worked hard to provide for his family. During his working years, he was employed with Caterpillar Inc. in Peoria, Illinois and with Salem R-80 as a bus driver. He was the proud owner of the Boss General Store for several years and enjoyed getting to know the families he encountered. Most important, Tooter was the Pastor for Boss Assembly Church for thirty-years. He deeply cared for his congregation and truly enjoyed his time there ministering to the community. Tooter devoted himself to teaching the gospel, fellowship, prayer, discipleship, and helping those in need, whenever, however, and wherever such need arose. Doing so was his life's privilege, mission, and joy. In his spare time, Tooter enjoyed coon hunting and fishing with Wanda. He loved to travel with the camper and frequently visited areas of Texas, Colorado, and enjoyed time at the Smokey Mountains. Tooter was often found at McDonalds with his coffee buddies, and was known as a professional people watcher. Tooter cherished the time spent with his family, especially with his grandchildren and great-grandchildren whom he was very proud of. Tooter leaves behind to cherish his memory, three children: Denny Pryor and wife Connie of Salem, MO, Tina Whitaker and husband Ryan of Salem, MO, and Michelle Pyatt and husband Jerry of Eureka, MO; six grandchildren: Stuart Pryor and wife Amber, Craig Pryor and wife Rena, Drew Whitaker and wife Shonda, Lance Whitaker and Shannon, Jared Pyatt and wife Amy, and Nick Pyatt and wife Lindsey; twelve great-grandchildren: Annabelle, Caroline, Luke, Jack, and Olivia Pryor, Mackenzie, Bayleigh, and Penelope Whitaker, Tyson, Finley, Owen, and Avery Pyatt; one sister: Berniece "Sis" Miner and husband James; and a host of special nieces, nephews, cousins, extended family and friends. Preceding him in death were his loving wife, Wanda (Woolf) Pryor; granddaughter: Jessica Whitaker; parents: James and Zola Pryor; and his brother: Lloyd and wife Dovie. Tooter was a wonderful man, Pastor, and friend. He will be remembered as a loving husband, amazing father, caring grandfather and great-grandfather. Funeral Service for Paul “Tooter” Floyd Pryor was held Sunday, March 8, 2020 at Boss Assembly of God Church. Jim Pryor led the congregation in singing “In the City Where the Lamb is the Light” and Rev. Eddie “Ed” Hawkins shared a eulogy as well as read the obituary. A tribute to his grandfather was given by Grandson Jared Pyatt. Dennis Skiles sung “What A Lovely Name”, Larry Woolf sung a special song, and Rev. Elvie Hedrick and Jay Hedrick spoke of Tooter. The Major Family sung “Oh – Where Could I Go” and the Assembly of God presented the Christian Flag to the Family. Rev. Paul Davis shared a wonderful message followed by Mark Mathes singing “The Pearly Gates”. Serving as Pallbearers were Stuart Pryor, Craig Pryor, Drew Whitaker, Kenny Pryor, Jared Pyatt, and Nick Pyatt. Honorary Pallbearers were Lance Whitaker and Tim Miner. Burial with Military Honors was in the Boss Cemetery. Arrangements were under the direction of Wilson Mortuary of Salem, Missouri.

Paul "Tooter" Floyd Pryor was born November 2, 1925 in Boss, Missouri to James Solomon and Zola (Davis) Pryor and passed away March 5, 2020, at Salem Memorial District Hospital at the age of ninety-four years. Tooter grew up in Boss and at... View Obituary & Service Information

The family of Paul "Tooter" Floyd Pryor created this Life Tributes page to make it easy to share your memories.

Send flowers to the Pryor family.