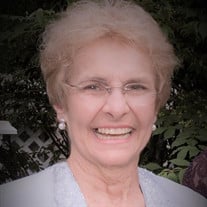 Paula Louise (Tozzi) Dunn was born on August 11, 1943 in Quincy, Massachusetts as the only child to John Victor and Emma Rose (Ciardelli) Tozzi. At the age of seventy-six years, Paula passed away peacefully on December 29, 2019 at her home in Viburnum, Missouri, surrounded by family. After a long battle, she succumbed to the effects of Alzheimer’s Disease. Paula grew up in Quincy, Massachusetts and graduated with the Class of 1961 from Archbishop Williams High School. She furthered her education at Salve Regina College in Newport, Rhode Island, obtaining a double major in English and Mathematics. Paula met the love of her life, Robert Dunn Jr., during her college years while he was stationed in Newport as an officer in the Navy. Paula and Robert were united in marriage on July 11, 1965 in Quincy, Massachusetts and together shared fifty-four beautiful years of marriage and were blessed with three children: Robert Glenn, III, Scott Alan, and Travis Wade. Paula took great pride in caring for her family. She worked as a substitute teacher for the Iron County C-4 Schools for many years. She thoroughly enjoyed her time spent with the students. Paula was a long-time and devoted member of St. Philip Benizi Catholic Church where she served in many capacities. Paula enjoyed her time spent outdoors in her flower gardens. She loved to travel and play bridge. Paula had a very creative mind and enjoyed crafts. She always had a project going. When her children were young, she often made clothes and costumes. Later in her life, Paula was a passionate quilter. Spending time with her children and grandchildren was most important to her, often traveling to Germany and New England to see them. Paula is survived by her loving and dedicated husband, Bob, who gave everything of himself as her primary caregiver during her illness. She is also survived by her three children: Robert Glenn Dunn, III and wife Julie of Avon, Connecticut, Scott Alan Dunn of Quincy, Massachusetts, and Travis Wade Dunn and wife Eva-Maria of Ilvesheim, Germany; five grandchildren: Logan and Chloe Dunn of Avon, Connecticut and Paul, Max, and Anne Marie Dunn of Ilvesheim, Germany; extended family and friends. Preceding her in death, were her parents, John and Emma Tozzi. Paula will be remembered for her persevering Boston accent, her smiling face and contagious laugh. She lit up the room and was a pleasure to be around. She was truly loved and will be deeply missed by all. A Celebration of Life for Paula Louise (Tozzi) Dunn was held Thursday, January 2, 2020 in the Wilson Mortuary Viburnum Chapel. Memorial Mass was held Friday, January 3, 2020 at the St. Philip Benizi Catholic Church with Father Victor Anokwute officiating. All arrangements were under the care and direction of Wilson Mortuary of Viburnum, Missouri.

Paula Louise (Tozzi) Dunn was born on August 11, 1943 in Quincy, Massachusetts as the only child to John Victor and Emma Rose (Ciardelli) Tozzi. At the age of seventy-six years, Paula passed away peacefully on December 29, 2019 at her home... View Obituary & Service Information

The family of Paula Louise (Tozzi) Dunn created this Life Tributes page to make it easy to share your memories.