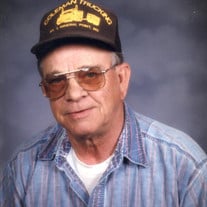 Perry Gene Camden was born on November 8, 1938, in Oates, Missouri to Otho and Iva (White) Camden and passed away on November 30, 2020 at age of eighty-two years. Perry grew up in Oates and graduated with the Class of 1957 from Lesterville High School. He was united in marriage to his sweetheart, Mary Hogan, on February 13, 1965 in St. Louis, Missouri and together shared fifty years of memories before her passing in November 2015. Perry and Mary were blessed with five children, Dewayne, Donna, Lavonda, Perry, and Debra Perry worked hard to provide for his family, during his working career, he was a taxidermist with Schwartz Studio in St. Louis and then a school bus driver with the Lesterville School District. Perry enjoyed the children and was very well-liked. He retired after thirty-five years of service to the Lesterville community. Perry lived life to the fullest and enjoyed hunting, fishing, and spending time at Clearwater Lake with the “Golden Boys”. He liked riding the four-wheeler and side by side around his property. Perry and Mary enjoyed traveling and camping, throughout the years they have made many wonderful memories with their family. Perry cherished his family deeply truly treasured the moments spent together; especially with his grandchildren, great-grandchildren, and great-great-grandchildren. Perry is survived by his loving children: Dewayne Wheeling and wife Mary of House Springs, MO, Donna Nichols and husband Steven of Salem, MO, Lavonda Smith and husband Butch of Viburnum, MO, and Perry Dean Camden and wife Vicki of Oates, MO; brother: Bobby Camden; as well as a host of grandchildren, great-grandchildren, great-great-grandchildren, aunts, uncles, nieces, nephews, cousins, brother and sisters-in-law, other relatives and friends. Preceding him in death, his wife: Mary Camden; daughter: Debra Nelson; parents: Otho and Iva Camden; brothers: Harmon and Lloyd; sisters: Marcella, Erma, and Betty. Perry will be remembered for the love he had for his family and friends. He will be deeply missed by all who knew and loved him. Memorial Services for Perry Gene Camden were held Sunday, December 6, 2020 in the Wilson Mortuary Viburnum Chapel with Pastor Greg Freeman officiating. Song selections played were “Precious Memories”, “Amazing Grace”, “How Great Thou Art”, and “Going Home”. Arrangements were under the direction of Wilson Mortuary of Viburnum, Missouri. Memorial Contributions may be made in memory of Perry Gene Camden and left at Wilson Mortuary. Online condolences may be entered at wilsonmortuary.com

Perry Gene Camden was born on November 8, 1938, in Oates, Missouri to Otho and Iva (White) Camden and passed away on November 30, 2020 at age of eighty-two years. Perry grew up in Oates and graduated with the Class of 1957 from Lesterville... View Obituary & Service Information

The family of Perry Gene Camden created this Life Tributes page to make it easy to share your memories.