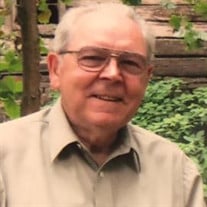 Rev. Perry Gene Lewis was born on April 19, 1932, in Greeley, Missouri to John and Cora (Bennett) Lewis and passed away on June 14, 2020, in Salem, Missouri at the age of eighty-eight years. Perry grew up and attended school in Greeley, Missouri. He furthered his education and received his ministry credentials through the mail with Berean School of the Bible. Perry was united in marriage to the love of his life, Betty Lou Smith on September 2, 1950 in Salem, Arkansas and together shared sixty-nine wonderful years of marriage and were blessed with four children: Terry, David, Scharlene, and Felecia. Perry worked hard to provide for his family. He moved to Salem and went into business with his brother-in-law Jack Stallings and named their company Stallings and Lewis Construction, and after a few years, Perry began Lewis Construction. Perry enjoyed working with his hands and helping others and built many homes and businesses in the area. Perry was called to the ministry and let the light of the Lord shine through him. He was a great man of God who truly dedicated himself to the Lord. Through the years Perry pastored at several churches to include: Boss, Berryman, and Pleasanton Assembly of God. He was an honorary member of Grace Community Church and enjoyed worship there. Perry was an inspiration to many and knew the Word. In his spare time, Perry enjoyed spending time outdoors. He liked to garden and share his bounty with others. Perry also enjoyed fishing at the lake with his best friend Mick, they shared several fish stories and many wonderful memories. Most important to Perry was his family. He was a devoted husband to Betty and a proud father of his children. Perry cherished the time spent with them and treasured the time with his grandchildren and great-grandchildren. Perry is survived by four children: Terry Lewis of Newburg, MO, David Lewis of Rolla, MO, Scharlene Welch and husband Tom of Salem, MO, and Felecia Stienbarger and husband Jerry of Salem, MO; one sister: Ina Boulware of Springfield, MO; brother-in-law: Harold Smith of Oates, MO; sister-in-law Eunice Stallings and husband Jack of Salem, MO; and sister-in-law Claudette Barton of Cherryville, MO; fourteen grandchildren; seven great-grandchildren; extended family and friends. Preceding him in death were, his loving wife Betty Lou Smith; parents: John and Cora Lewis; siblings: Ralph Lewis, Delbert Lewis, Paul Lewis, Harley “Speed” Lewis, Ova “Rusty” Lewis, Ila Curtis, Wanda Licklider, Helen Lewis, Joanne Lewis, and John Lewis; and many loved brother and sister-in-laws. Perry will be remembered for his love for others, the smile on his face and how he loved to talk about the Lord. He will be deeply missed by all who knew him. Funeral Services for Rev. Perry Gene Lewis were held Friday, June 19, 2020 in the Wilson Mortuary Salem Chapel with Rev. Mick Thrasher officiating. A special letter was shared and the Assembly of God Association presented the family with a Christian Flag. Song selections played were "Life's Railway to Heaven", "How Beautiful Heaven Must Be", "Harvest Time", and "Tell Me the Story of Jesus". Serving as Pallbearers were Caleb Stienbarger, David Welch, Terry Lewis, Gabe Lewis, David Lewis, and Dawson Lewis. Honorary Pallbearers were Jacob Stienbarger, Jerry Stienbarger, Tom Welch, Paul Davis, and Jack Stallings. Burial was in the Smith Cemetery. Arrangements were under the direction of Wilson Mortuary of Salem, Missouri.

Rev. Perry Gene Lewis was born on April 19, 1932, in Greeley, Missouri to John and Cora (Bennett) Lewis and passed away on June 14, 2020, in Salem, Missouri at the age of eighty-eight years. Perry grew up and attended school in Greeley, Missouri.... View Obituary & Service Information

The family of Rev. Perry Gene Lewis created this Life Tributes page to make it easy to share your memories.