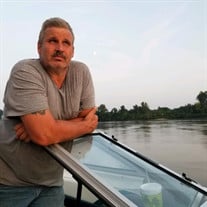 Randall “Randy” Scott Bowers was born March 6, 1964 in Roscoe, New York to Ronald Nelson and Helen Marie (Naumovitz) Bowers. He grew up in upstate New York near the Catskill Mountains and graduated with the class of 1982 from Roscoe Central High School. After graduation, Randy enlisted into the United States Army starting his military career. Randy served from 1983-1987 and reenlisted in 2002 after the events of 9/11. During his time in the military, Randy earned several decorations, medals, badges, citations, ribbons, and awards. He served his country proudly, honorably, and faithfully until his retirement in 2008. Randy was united in marriage to the love of his life, Michelle Lee Busalacki, January 5, 2003 in St. Louis County, Missouri. They were blessed with nineteen years of marriage and two children: Meagean and Thomas. Randy took great pride in providing for his family, raising his children with strong family values, and being a dedicated husband. Randy moved to Salem, Missouri in July of 2015 and enjoyed retirement on a small farm. He was a jack of all trades, liked tinkering around, and was a master mechanic. An avid outdoorsman, Randy could be found hunting, trapping, and fishing. He was a very special man, never met a stranger, and often helped others. While fishing at Meramec, he would help kids’ fish after catching his limit. Randy was very active and passionate about several Veterans events to include, Fishing for Freedom, Warriors Weekend, and The Fallen Outdoors. He was part of the American Legion Post 99 and liked spending time with fellow Veterans. Randy departed this life February 9, 2022 in Salem, Missouri at the age of fifty-seven years. He leaves behind to cherish his memory, loving wife Michelle Bowers; daughter: Meagean Shriner and husband Cory; son: Thomas Michael Bowers; grandsons: Joshua and Justin Shriner; siblings: Clarence Hendrickson Jr. and wife Shirley, Julie Hendrickson-Hendrix and husband Roy, John Hendrickson and wife Kim, Kathy Maxwell, Mary McClure, Clara Hendrickson, Rhonda Nowlin Kirk, Natalie Bowers, Robert Hendrickson, and Stanley Hendrickson and wife Christine; as well as a host of aunts, uncles, nieces, nephews, cousins, other relatives and dear friends. Preceding him in death, his parents: Ronald and Helen Bowers and sibling: Vicky, Allen, Johnny, and Larry. Randy will be remembered as a beloved husband, a great father, an exceptional grandfather, and an enthusiastically patriotic Veteran of the U.S. Army. His friendship and generosity will be forever remembered by those he left behind. Memorial Services for Randall “Randy” Scott Bowers were held Friday, February 25, 2022 in the Wilson Mortuary Salem Chapel with Military Chaplain Hamlin officiating. Wonderful memories were shared by family and friends and special song selection played was “Mind On Fishin’”. Burial with Military Honors was at the Missouri Veterans Cemetery Waynesville, Missouri. Arrangements were under the direction of Wilson Mortuary of Salem, Missouri. . Online condolences may be entered at wilsonmortuary.com

Randall &#8220;Randy&#8221; Scott Bowers was born March 6, 1964 in Roscoe, New York to Ronald Nelson and Helen Marie (Naumovitz) Bowers. He grew up in upstate New York near the Catskill Mountains and graduated with the class of 1982 from Roscoe... View Obituary & Service Information

The family of Randall "Randy" Scott Bowers created this Life Tributes page to make it easy to share your memories.

Send flowers to the Bowers family.