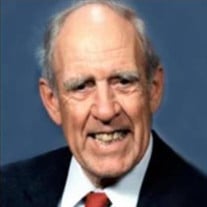 Richard Anderson Haxton, 95, of Edmond, Oklahoma formerly of Salem, Missouri passed away Tuesday, March 10, 2020 in Edmond, Oklahoma. Graveside Services with Military Honors will be held at 10:00 a.m. Monday, March 16, 2020 in the Cedar Grove Cemetery. Arrangements are under the direction and care of Wilson Mortuary of Salem, Missouri. Richard is survived by his children Paul, of Edmond, Oklahoma and Dianne, of China Spring, Texas along with their spouses Judy and Joel (Hurley). Also, there are four grandchildren, Brenda Biondi Oliver and husband Dylan of Half Moon Bay, California, Steven Biondi and wife Dana, of Phoenix, Arizona, Geoffrey Haxton and wife Jennifer of Lubbock, Texas and Christopher Haxton and wife Courtney of Edmond, Oklahoma. In addition, he is survived by six great-grandchildren, Jackson and Eli Oliver and Cameron, Perry, Hunter and Mickie Haxton. He is survived by many other loving relatives, including favorite niece Nancy Nowlin and husband Steve, and nephew Robert Haxton and wife Elaine. And finally, Richard will be greatly missed by Fay’s sister Janine and husband Ross Gordon, Auckland, New Zealand. In lieu of flowers, the family would like to suggest donations to the Dent County Animal Welfare Society. Online condolences may be entered at www.wilsonmortuary.com

The family of Richard Anderson Haxton created this Life Tributes page to make it easy to share your memories.

Send flowers to the Haxton family.