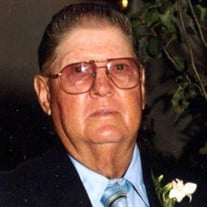 Richard Lloyd Norris was born March 27, 1936 in Salem, Missouri to James and Wanna (Whitaker) Norris. He was one of nine children and raised on the family farm in Salem. Richard was united in marriage to the love of his life, Cora Belle Miner, December 27, 1955 in Salem and shared sixty-six years of laughter and memories together. Richard and Cora were blessed with four children: Rita, Pam, Ray, and Vivian. Richard was a hard-working man always providing for his family. He started his working career with the International Shoe Factory and retired from Amax Lead Mines after many years of dedication. Richard was a loving and supportive husband, caring father, and doting grandfather and great-grandfather. His family was most important to him and he treasured the memories made with them. Richard was an avid outdoorsman and enjoyed what nature provided. He liked to deer hunt, run his beagles, and coon hunt. Richard enjoyed gardening and sharing his bounty with others. He was a man of faith and enjoyed attending Walking Faith Ministries. Richard departed this life January 5, 2022 in Salem, Missouri at the age of eighty-five years. He leaves behind to cherish his memory, loving wife Cora Norris of Salem, MO; four children: Rita Knight and husband Tim, Pam Hanger and husband Willie, Ray Norris, and Vivian Pryor all of Salem, MO; one sister: Lucille Middleton of Salem, MO; one brother: M.L. Norris of Salem, MO; sisters-in-law: Barb Norris of Illinois, Imogene Decker and husband Jim of Salem, MO, and Hattie Brooks of Salem, MO; seven grandchildren: Brad Gibbs and Jessica, Mike Norris and Alanna, Amanda Dooley and husband Dustin, Sandra Fore and husband Dustin, Darin Pryor and wife Wendy, Amy Hayes and husband Pat, Amanda Pemberton and husband Jerry; twelve great-grandchildren with one on the way; as well as a host of nieces, nephews, cousins, other relatives, and dear friends. Preceding him in death, parents: James and Wanna Norris; siblings: Irene Cavadess and husband Rufus, Archie Norris and wife Ruby, Goldie Browning and husband L.C., Betty Walberg and husband Mark, Rosetta Sutton and husband Jerry, and J.C. Norris; brother-in-law: Stan Middleton; sister-in-law: Mary Ann Norris; and son-in-law: Danny Pryor. Richard was a great man and leaves behind a legacy of love, devotion, and care. He will be forever missed but not forgotten. Funeral Services for Richard Lloyd Norris were held Sunday, January 9, 2022 in the Wilson Mortuary Salem Chapel with Pastor Lyndell Decker officiating. Song selections played were “Old Rugged Cross”, “I’ll Fly Away”, and “In the Garden”. Serving as Pallbearers were Brad Gibbs, Mike Norris, Dustin Dooley, Pat Hayes, Dustin Fore, and Darin Pryor. Burial was in the North Lawn Cemetery. Arrangements were under the direction of Wilson Mortuary of Salem, Missouri. Online condolences may be entered at wilsonmortuary.com

Richard Lloyd Norris was born March 27, 1936 in Salem, Missouri to James and Wanna (Whitaker) Norris. He was one of nine children and raised on the family farm in Salem. Richard was united in marriage to the love of his life, Cora Belle Miner,... View Obituary & Service Information

The family of Richard Lloyd Norris created this Life Tributes page to make it easy to share your memories.

Send flowers to the Norris family.