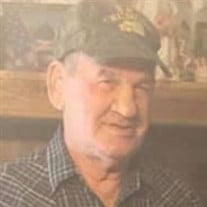 Richard Melton Overby was born on March 25, 1944 to Fred and Floy (Light) Overby in Salem, Missouri. He was raised in Salem and graduated with the Class of 1958 from Salem High School. Richard met the love of his life, Wilma Jean Smith, at a young age and on March 22, 1962 they were united in marriage. Richard and Wilma together shared fifty-nine years of memories and were blessed with one son: Richard. Richard worked hard to provide for his family, he was employed most of his life in the heating and cooling field. He started working with Bob Wofford and after a few years, he went on his own. Richard enjoyed working with his hands and helping others in the community. He had a heart of gold always willing to lend a helping hand to those in need. Richard was an avid outdoorsman, he liked camping and fishing on the Gasconade River as well as deer and turkey hunting. At times, Richard could be found just sitting outside enjoying nature. He loved his family most of all and cherished the memories made together, especially with his grandchildren. Richard passed away on June 14, 2021 in Salem, Missouri at the age of seventy-seven years. He leaves behind to cherish his memories, his loving wife Wilma Overby of the home; one son: Richard Overby and wife Jackie of Salem, MO; two sisters: Dottie Chapman and husband Richard of Rolla, MO and Ann Raulston and husband Walter of Rolla, MO; four grandchildren: Brittney Overby, Keith Hollinsworth, Amy Norris, and Eathan Head; special nephew: Billy Ursery; as well as a host of nieces, nephews, other relatives, and friends. Preceding him in death, parents: Fred and Floy Overby; sisters: Mary Kerrie and Dorothy Norris; brothers: Marvin, Doran, Steve Overby. Richard will forever be remembered for his kind heart and gentle spirit. Funeral Services for Richard Melton Overby Sr. were held Friday, June 18, 2021 in the Wilson Mortuary Salem Chapel with Pastor Lyndell Decker and Ron Light officiating. Song selections played were “Roses Will Bloom Again” and “In The Garden”. Serving as Pallbearers were Bob Ellerman, Silas Stricklin, Billy Usery, Roger Carpenter, Mikol Skatts, and Bill Usery Sr. Honorary Pallbearers were Terry Quick, Laymon Wilder, and Wayne Carter. Burial was in the North Lawn Cemetery. Arrangements were under the of Wilson Mortuary of Salem, Missouri. Online Condolences may be entered at www.wilsonmortuary.com

Richard Melton Overby was born on March 25, 1944 to Fred and Floy (Light) Overby in Salem, Missouri. He was raised in Salem and graduated with the Class of 1958 from Salem High School. Richard met the love of his life, Wilma Jean Smith, at a... View Obituary & Service Information

The family of Richard Melton Overby Sr created this Life Tributes page to make it easy to share your memories.

Send flowers to the Overby family.