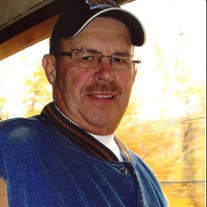 Rick Lynn Langston was born on October 20, 1949 in West Plains, Missouri to A. V. and Helen Langston and passed away on February 4, 2020 at Barnes Jewish Hospital in St. Louis, Missouri at the age of seventy years. Rick grew up in West Plains, Missouri and graduated from West Plains High School with the Class of 1967. After high school, Rick went into the United States Army where he served his country faithfully until his honorable discharge on November 30, 1970. Rick married his sweetheart, Gracia (Campbell) Leonard, on June 13, 2009 at New Harmony Church in Salem, Missouri and together they shared ten years of marriage and were blessed to share four children: Candace, Jason, Justin, and Benjamin. Rick started his working career in 1971 as a sales representative with Holsum Bread. He was later employed by Walden Brokerage in 1984 before becoming the director of advertising with Town and Country Supermarkets in 1997. Rick had a solid work ethic, was committed to his work and worked hard to provide for his family. Rick enjoyed all things outdoors. He loved fishing, motorcycle rides, and being with his family. He cherished the time spent with his children and was proud of their accomplishments. He treasured his grandchildren and his love for them brought him great joy. Rick was an active member of New Harmony Church. He loved the Lord and was strong in his faith. Rick was full of wisdom and a mentor to many. Rick is survived by his loving wife of the home: Gracia Langston; children: Candace Nash and husband Jim of West Plains, MO, Jason Langston and wife Fran of West Plains, MO, and Justin Langston and wife Angie of Jonesboro, AR; stepson: Benjamin Leonard and wife Valerie of Cabool, MO; sister: Lisa Langston; grandchildren: James Nash, Jadyn Langston, Dawson Langston, Hudson Langston, Clayton Vincent, Abraham Leonard, Jeremiah Leonard, and Josiah Leonard; great-grandson: Liam Nash; nephew: Eric Langston; niece: Helen Beisswenger; extended family and friends. Preceded in death by his parents: A.V. and Helen Langston and brother: Larry Langston. Rick will be remembered for his courage, faith, and sense of humor. He was dearly loved by his wife, children, grandchildren and great-grandchildren. He will truly be missed by all who knew him. Funeral Service for Rick Lynn Langston was held Saturday, February 8, 2020 at New Harmony Church with Pastor Noah Schlag and Pastor Benjamin Leonard officiating. Songs selections played were "I Will Rise", "Save A Place For Me", and "God of all My Days". Serving as Pallbearers were Justin Langston, Jason Langston, Jim Nash, Tommy Thompson, Eric Langston, J Clark, Shawn Bolerjack, and Allan Branstter. Burial with Military Honors was in the Cedar Grove Cemetery. Arrangements were under the direction of Wilson Mortuary of Salem, Missouri. Memorial Contributions may be made in memory of Rick Langston towards Missions and left at Wilson Mortuary. Online condolences may be entered at www.wilsonmortuary.com

Rick Lynn Langston was born on October 20, 1949 in West Plains, Missouri to A. V. and Helen Langston and passed away on February 4, 2020 at Barnes Jewish Hospital in St. Louis, Missouri at the age of seventy years. Rick grew up in West Plains,... View Obituary & Service Information

The family of Rick Lynn Langston created this Life Tributes page to make it easy to share your memories.

Send flowers to the Langston family.