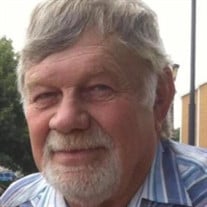 Robert "Bob" Glenn Dooley was born September 4, 1944, in Holdenville, Oklahoma to Clinton and Aubree (Strickland) Dooley and passed away April 19, 2020, surrounded by his family at his home in Salem, Missouri at the age of seventy-five years. Bob grew up and attended school in Calvin, Oklahoma; he graduated with the Class of 1962 from Calvin High School. Bob entered the United States Army and served his county faithfully until his honorable discharge in 1968. On December 26, 1999, Bob married his sweetheart, Glenda June Schafer and together they shared twenty years of marriage and were blessed to share six children: Ricky, Becky, Shana, Lisa, George, and Larry. Bob worked hard to provide for his family. He was proud to be an electric lineman and was passionate about his work. Bob was blessed with the opportunity to travel the U.S. working his trade and making many friends along the way. He retired as a general foreman after fifty years of dedicated service. Bob was a true outdoors-man, with his passion being hunting and fishing. He loved nothing more than spending time outdoors in the sunshine with his friends and family. Bob loved his family dearly and cherished his time spent with them, especially his grandchildren and great-grandchildren. Bob is survived by his loving wife: Glenda (Schafer) Dooley of the home; children: Ricky Dooley of Texas, Becky Aguero and husband Pat of Texas, Shana Simon and husband Jarred of Oklahoma, Lisa Emory and husband Rick of Salem, MO, George Canaday of St. James, MO, Larry Newman and wife Tonya of Salem, MO; one sister: Joy Ring of Holdenville, OK; many grandchildren; several great-grandchildren; extended family and friends. Preceding him in death were his, parents: Clinton and Aubree Dooley; sister: Deborah Priest; brothers-in-law: John Ring and Melvin Priest. Bob was a man of faith, devoted husband, loving father, and caring grandfather and great-grandfather. He will be remembered for the love he had for his family and friends and will deeply missed. Graveside Services for Robert “Bob” Glenn Dooley were held Thursday, April 23, 2020 at Green Forest Cemetery with Pastor Rick Pitchford officiating. Song selections played were “Go Rest High On That Mountain” and “Amazing Grace”. Serving as Pallbearers were his loving family. Arrangements were under the direction of Wilson Mortuary of Salem, Missouri. Memorial Contributions may be made in memory of Robert "Bob" Glenn Dooley and left at Wilson Mortuary. Online condolences may be entered at wilsonmortuary.com

Robert "Bob" Glenn Dooley was born September 4, 1944, in Holdenville, Oklahoma to Clinton and Aubree (Strickland) Dooley and passed away April 19, 2020, surrounded by his family at his home in Salem, Missouri at the age of seventy-five years. Bob... View Obituary & Service Information

The family of Robert "Bob" Glenn Dooley created this Life Tributes page to make it easy to share your memories.

Send flowers to the Dooley family.