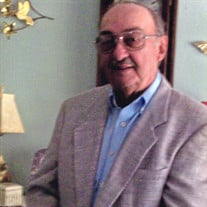 Robert "Pete" Luther Mobray was born on August 24, 1928, in Herman, Missouri to Luther and Marie (Patrick) Mobray and passed away November 28, 2019, in Salem, Missouri at the age of ninety-one years. Pete grew up and attended school in the Herman/St. Louis area. He entered the United States Navy in 1946 and served his country faithfully until his discharge in 1948. During his time in the military, he served in World War II and for his faithful service, Pete earned many decorations, medals, ribbons, and awards. In his early 20's, Pete moved to Viburnum and starting working at St. Joe Lead Mines as a Sample Man. He worked for the mines for over twenty years. Pete attended First Baptist Church of Viburnum and was saved and baptized. He was a proud father of his son, Rob Mobray. Pete loved to spend time with his family, especially his grandchildren and great-grandchildren. They enjoyed several camping trips near the Clearwater and Black Rivers. Pete also enjoyed late nights gigging with his family and friends. When he wasn't spending time outdoors, Pete could be found watching old Westerns and football games. Pete is survived by his son: Rob Mobray and wife Linda of Salem, MO; two brothers: Richard Jordan and wife Doris of Marshall, MO and Gary Jordan of Viburnum, MO; one sister: Carol Midgett of Steelville, MO; two grandchildren: Wesley Mobray and wife Kendra of Salem, MO and Whitley Notter and husband Zach of Salem, MO; three great-grandchildren: Bryce Mobray, Stetson Mobray and Lennox Notter; as well as several nieces, nephews, extended family and friends. Preceding him in death were his parents: Luther and Marie Mobray and brother: Morris Hufstedler. Pete will be remembered as a loving father, brother, grandfather, and great-grandfather. He will be greatly missed by all who knew and loved him. Funeral Service for Robert "Pete" Luther Mobray was held Sunday, December 1, 2019 in the Wilson Mortuary Salem Chapel with Pastor Lyndell Decker officiating. Song Selections played were, "I Can Only Imagine", "Remember When", and "Go Rest High On That Mountain". Serving as Pallbearers were: Wes Mobray, Ryan Jordan, Zach Notter, Wade Jordan, Colin Webb, and Craig Webb. Burial was in the Upper Indian Creek Cemetery in Viburnum, Missouri. All arrangements were under the direction of Wilson Mortuary of Salem, Missouri.

Robert "Pete" Luther Mobray was born on August 24, 1928, in Herman, Missouri to Luther and Marie (Patrick) Mobray and passed away November 28, 2019, in Salem, Missouri at the age of ninety-one years. Pete grew up and attended school in the... View Obituary & Service Information

The family of Robert "Pete" Luther Mobray created this Life Tributes page to make it easy to share your memories.

Send flowers to the Mobray family.