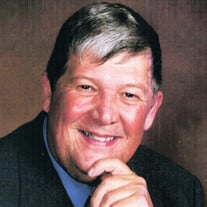 Rodney Charles Leathers was born on June 27, 1956 in Kennett, Missouri to Charles Junior and Betty Jo (Belt) Leathers and passed away peacefully, after tending to his garden and bees, on August 3, 2020 in Salem, Missouri at the age of sixty-four years. Rodney grew up in Bismarck, Missouri and graduated with the class of 1974 from Bismarck High School. In 1978, Rodney was united in marriage to Sherry and the two were blessed with three children: Jerrod, Randon, and Angela. Rodney was very proud of his children and their accomplishments. On June 16, 2017 in Salem, Missouri, Rodney was united in marriage to his sweetheart, Glenyl Delantar and together they shared three wonderful years of memories. Rodney had a lifelong passion for trains that began at a young age. His interest in trains continued to grow along with his sense of adventure. Rodney managed to make his living doing what he loved and worked hard to provide for his family. He spent most of his career with Union Pacific Railroad until his retirement. After retirement, Rodney found his interest in beekeeping and spent a lot of time with his bees. He was a member of the Mark Twain Beekeepers Club of Salem and cooked for many of their monthly meetings. Rodney was a man of faith and a member of the Sacred Heart Catholic Church and Knights of Columbus. Rodney enjoyed spending his time outdoors and could be found tending to his garden, in the woods hunting, or by the pond fishing. Rodney was one of a kind and well known for his big personality and colorful character. Rodney had a beautiful voice and liked to sing. Most important to him was his family, he cherished the time spent with them and treasured the memories they made. He especially loved the time with his grandchildren. Rodney leaves behind to cherish his memory, his loving wife: Glenyl Leathers of the home; children: Jerrod Leathers and wife Becky of California, MO, Randon Leathers and wife Lisa of Boonville, MO, and Angela Wimmer and husband Tim of Williamsburg, MO; mother: Betty Jo Leathers of Salem, MO; three siblings: Janace Mahurin and husband Randy of Salem, MO, Mark Leathers and wife Tracy of Rolla, MO, and Tim Leathers and wife Tami of Wilton, IA; sister-in-law: Linda Leathers of Salem, MO; six grandchildren: Rhad Leathers, Reese Leathers, Aiden Wimmer, Olivia Wimmer, Kiernan Leathers and Kade Leathers; extended family and friends. Preceding him in death were, his father: Charles Junior Leathers; granddaughter: Riley Leathers; and brother: Jackie Leathers. Rodney created laughter wherever he went. He will be remembered as a good friend to many and devoted husband, father, and grandfather. Rodney will be deeply missed. Memorial Mass for Rodney Charles Leathers was held Saturday, August 8, 2020 at the Sacred Heart Catholic Church with Father Jose Antoney officiating. Celebration of Life was held in the Wilson Mortuary Salem Chapel with Pastor Tim Leathers officiating. Special Music was provided by Logan and Kim and additional song selection played was “Mercy Rewrote My Life”. Inurnment was in the Sacred Heart Courtyard Columbarium. Arrangements were under the direction of Wilson Mortuary of Salem, Missouri. Memorial Contributions may be made in memory of Rodney Leathers to Maghaway Elementary School in Talisay City, Cebu Philippines and left at Wilson Mortuary. Online condolences may be entered at wilsonmortuary.com

Rodney Charles Leathers was born on June 27, 1956 in Kennett, Missouri to Charles Junior and Betty Jo (Belt) Leathers and passed away peacefully, after tending to his garden and bees, on August 3, 2020 in Salem, Missouri at the age of sixty-four... View Obituary & Service Information

The family of Rodney Charles Leathers created this Life Tributes page to make it easy to share your memories.

Send flowers to the Leathers family.