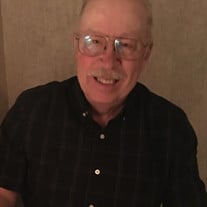 Roger Donald Fandel was born on May 18, 1948, in Peoria, Illinois to William and Helen (Crawford) Fandel. He grew up in East Peoria and graduated with the class of 1966 from East Peoria Community High School. Roger was united in marriage to the love of his life, Loretta May Williams on July 27, 1968 in Pekin, Illinois. Roger and Loretta shared fifty-three years of laughter and memories. They were blessed with one daughter, Tracy, and later blessed with a son-in-law and two grandsons. Roger was a hard worker and very precise in his work. He started working for Caterpillar while in high school and retired after many years of dedication. Roger enjoyed working with his hands and was a skilled woodworker. He took great pride in his work and built several items, to include nightstands. Roger was an avid outdoorsman and appreciated what nature provided. While in Wisconsin, he enjoyed kayaking and later loved canoeing on the Current River. He liked watching the wildlife and enjoyed feeding the birds, fish, squirrels, and hummingbirds. Roger was a man of faith and since moving to Salem, attended Oak Grove Baptist Church. He previously attended Oak Grove Bible Church in Illinois for many years. Roger loved his church family and enjoyed the fellowship with them. His faith and his family were most important to him. Roger cherished spending time making memories with his family, especially with his grandsons. Roger departed this life on June 3, 2022 in Chesterfield, Missouri at the age of seventy-four years. He leaves behind, his loving wife: Loretta Fandel of Salem, MO; daughter: Tracy Coburn and husband Kevin of Bloomingdale, IL; grandsons: Jason and Ryan Coburn of Bloomingdale, IL; sister: Vicki Fandel of East Peoria, IL; father and mother-in-law: Arthur and Lucille Williams of Salem, MO; as well as several nieces, nephews, other relatives, and dear friends. Preceding him in death, parents: William and Helen Fandel and brother: William “Bill” Fandel. As we all know, Roger had a very dry sense of humor. He was always thinking of others and had a huge heart. Roger left his family countless and unforgettable memories to hold onto. His legacy will live on in those who loved him most. Funeral Services for Roger Donald Fandel were held Saturday, June 11, 2022 in the Wilson Mortuary Salem Chapel with Pastor Rocky Lindley officiating. Special Memories were shared by Ryan and Tracy and Special Music was provided by Ryan and Kevin singing, “His Mercy Is More”. Graveside Services were held Sunday, June 12, 2022 at the Oak Grove Bible Church, East Peoria, Illinois with Pastor Cliff Elliott officiating. Serving as Pallbearers were Kevin Coburn, Jason Coburn, Ryan Coburn, Ed Boore, Perry Crawford, and Chris Hendrix. Arrangements were under the direction of Wilson Mortuary of Salem, Missouri. Online condolences may be entered at www.wilsonmortuary.com

Roger Donald Fandel was born on May 18, 1948, in Peoria, Illinois to William and Helen (Crawford) Fandel. He grew up in East Peoria and graduated with the class of 1966 from East Peoria Community High School. Roger was united in marriage to... View Obituary & Service Information

The family of Roger Donald Fandel created this Life Tributes page to make it easy to share your memories.

Send flowers to the Fandel family.