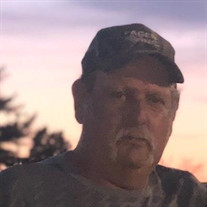 Roger Lloyd Wells was born November 5, 1955, in Dent County Missouri to Lloyd Donald and Irene (Roberts) Wells and passed away September 6, 2019, at his home in Edgar Springs, Missouri at the age of sixty-three years. Roger was raised in Salem, Missouri and graduated from Salem High School with the Class of 1973. He was saved in his early twenties at New Home Baptist Church and followed in baptism in the Dry Fork River. Roger was united in marriage to the love of his life, Tricia Irene Malone, on December 20, 1974. Together they shared forty-four years of marriage and were blessed with two children: Heath and Heather. Through the years, Roger was a jack of all trades, working hard to support his family. He started right out of high school at the International Shoe Factory. He then operated his own business, Wells Roofing before working maintenance at Barred's. He ended his working career with the Missouri Department of Conservation where he was a carpenter for thirty years. Roger was an avid gun collector and true outdoorsman who loved his time in the woods or near the water. He enjoyed hunting, fishing, camping, and boating; he was also a past member of the Eagles Club. In his older years, you could find him on the couch watching Westerns on television. Roger's real passion was his family. He always enjoyed supporting his children and grandchildren in their activities and spending time with his family and friends. Preceding him in death, were his parents: Lloyd and Irene Wells. Roger is survived by his loving wife: Tricia Wells of Edgar Springs, MO; two children: Heath Wells and wife Lisa of Salem, MO and Heather Lee and husband Brian of Salem, MO; five grandchildren: Heather, Tyler, Chase and girlfriend Courtney, Marissa and Dylan; one great-grandchild: Myah; many other family members and friends. Roger will be remembered as a devoted husband, loving father and a caring grandfather. Funeral Service for Roger Lloyd Wells was held Wednesday, September 11, 2019 in the Wilson Mortuary Salem Chapel with Pastor Charlie Younger officiating. Serving as Pallbearers were: Chase Wells, Dylan Wells, Steve Wells, Dave Shelton, Kenny Welch, Chad Heithold, Tandy Crabtree, Jeff Dalton, Lowell Fowler, Tommy Shaw, Jimmy Hobson and Michael Thompson. Burial was in Wells Family Cemetery. All arrangements were under the direction of Wilson Mortuary.

Roger Lloyd Wells was born November 5, 1955, in Dent County Missouri to Lloyd Donald and Irene (Roberts) Wells and passed away September 6, 2019, at his home in Edgar Springs, Missouri at the age of sixty-three years. Roger was raised... View Obituary & Service Information

The family of Roger Lloyd Wells created this Life Tributes page to make it easy to share your memories.

Send flowers to the Wells family.