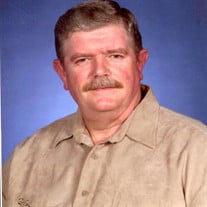 Ronald Eugene Gibbs was born on May 13, 1950, in Salem, Missouri to Wilford “Elmo” and Erma Jean (Hampton) Gibbs and passed away on December 20, 2020 in Nixa, Missouri at the age of seventy years. Ronald grew up in Salem and graduated from Salem High School with the Class of 1968. He was united in marriage to his sweetheart, Vickie L. Drury, on August 1, 1970 at Oak Grove Baptist Church in Salem. Ronald and Vickie together shared fifty years of memories and were blessed with two children, Melissa and Brent. Ronald was a certified maintenance mechanic, starting his working career with Amax Aluminum Company, then working for McDonnell Douglas, and retiring from Norando Aluminum. He was a hard worker, worked hard to provide for his family, and taught his children the value of hard work. Ronald was proud of his children and treasured the moments spent with his grandchildren and great-grandchildren. Ronald enjoyed working with his hands and woodworking, he was very talented and took great pride in his work. Some of his masterpieces were curtain rod shelves, wall shelves, and flower boxes to which his family and friends still cherish today. In his younger years, Ronald loved playing softball and coached several youth leagues. He was an avid Cardinals Baseball Fan. Ronald was a strong man of faith and a great example of God’s love which was evident to everyone he met. He surrendered to the calling and was ordained as a Deacon at the age of twenty-five while attending Oak Grove. Throughout the years, Ronald has also served at Friendship Baptist Church in Dexter and Ridgecrest Baptist Church in Springfield. Ronald had a gifted voice and sang bass with two Southern Gospel Quartets, “Glory Bound” and “Messengers”. He faithfully served the Lord in many areas and provided love and support for many in the communities in which he served. Ronald is survived by, loving wife of the home: Vickie Gibbs; children: Melissa Smith and husband Kevin of Springfield, MO and Brent Gibbs of Pocahontas, AR; brother: Mike Gibbs; sisters: Diane Gilmore and Marsha Williams and husband Jason; grandchildren: Austin Smith and wife Shelle, Steven Smith and wife Angel, Jakob Burns, Sarah Smith, Christian Gibbs, and Chyann Gibbs; great-grandchildren: Aubree and Elias; as well as many nieces, nephews, extended family and friends. Preceding him in death, parents: Elmo and Erma Gibbs. Ronald was one of a kind and truly valued spending time with his family and friends. He will be forever missed by all who knew and loved him. Graveside Services for Ronald Eugene Gibbs were held Thursday, December 24, 2020 at the Dry Fork Cemetery with Pastor Joe Hubbs officiating. Song selection played was “Victory In Jesus”. Serving as Pallbearers were Bud Drury, Danny Drury, Kevin Drury, Keith Drury, Freddie Hill, and Kevin Smith. Arrangements were under the direction of Wilson Mortuary of Salem, Missouri. Memorial Contributions may be made in memory of Ronald Eugene Gibbs to the Lottie Moon Christmas Offering and left at Wilson Mortuary. Online condolences may be entered at wilsonmortuary.com

Ronald Eugene Gibbs was born on May 13, 1950, in Salem, Missouri to Wilford &#8220;Elmo&#8221; and Erma Jean (Hampton) Gibbs and passed away on December 20, 2020 in Nixa, Missouri at the age of seventy years. Ronald grew up in Salem and graduated... View Obituary & Service Information

The family of Ronald Eugene Gibbs created this Life Tributes page to make it easy to share your memories.