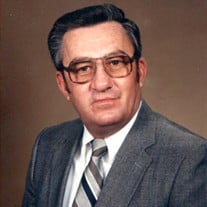 Ronald “Ronnie” Clyde Inman was born August 7, 1939 in St. Louis, Missouri to Lawrence Clyde and Norma Louise Inman. He grew up in Salem, Missouri and graduated from Salem High School. After high school, Ronnie enlisted into the Army National Guard and furthered his education. He faithfully served his country until his honorable discharge. Ronnie was united in marriage to the love of his life, Janet Lee Sullivan, February 10, 1962 at the Salem Christian Church and together shared fifty-nine years of laughter and memories. Ronnie and Janet were blessed with two children: Keith and Kendra, whom he was very proud of. Family was important to Ronnie; he valued the time spent with them and treasured the memories made with his grandchildren. Ronnie had a strong drive to build a legacy for his family, he was a successful businessman in the oil industry for many years. Ronnie began his career alongside his father at Inman Oil, he later bought the business and ran it for many years before retiring. In his retirement years, Ronnie really enjoyed farming and took great pride in buying, raising, and selling Black Angus Cattle and Tennessee Walking Horses. Ronnie was an avid golfer, liked being outdoors, and lived life to the fullest. He was a big hunter of quail, pheasant, deer, and turkey. Ronnie was a sports enthusiast, enjoyed watching and supporting the Salem Tigers, and listening to St. Louis Cardinals Baseball on the radio. He was a solid republican and loved politics. Ronnie was a man of great faith and lifelong member of Salem Christian Church. He accepted Christ at a young age and followed in baptism. Ronnie faithfully served the Lord and was a past deacon. He was a member of the Masonic Lodge #225 and a 33rd Degree Mason. Ronnie was also a Shriner and took great pride in sponsoring kids. Ronnie departed this life December 11, 2021 in Rolla, Missouri at the age of eighty-two years. He leaves behind to cherish his memory, loving wife Janet Inman of the home; son: Keith Inman and wife Becky of Salem, MO; daughter: Kendra Schmitt and husband Brandon of Salem, Missouri; grandchildren: Mackenzie and Greyson Schmitt; nephew: Garrick Grogan and wife Selena of Springfield, MO; niece: Christina Hansen and husband Bill of St. Louis, MO; great-nephew and nieces: Gregory, Lauren, and Leigha Grogan; extended family and dear friends. Preceding him in death, parents: Clyde and Norma Inman; brother: Ray Inman; and sister: Jean Grogan. Ronnie was a loving husband, father, grandfather and friend. He will be forever missed. Funeral Services for Ronald “Ronnie” Clyde Inman were held Tuesday, December 14, 2021 in the Wilson Mortuary Salem Chapel with Pastor Tim Hill officiating. Special Music was provided by soloist Claudia Sullivan singing “Amazing Grace” and additional song selections played were “The Old Rugged Cross” and “What A Friend We Have In Jesus”. Serving as Pallbearers were Jerry Steelman, Roger Schafer, Lance Hasten, Nick Schmitt, Steve Sullivan, and Mark Weaver. Honorary Pallbearers were Billy Miller, Ray Lewis, Bob Thompson, Steve Hendricks, and Sonny Johns. Burial was in the Cedar Grove Cemetery. Arrangements were under the direction of Wilson Mortuary of Salem, Missouri. Memorial Contributions may be made in memory of Ron Inman to the Shriners Hospital for Children and left at Wilson Mortuary. Condolences may be left at www.wilsonmortuary.com

The family of Ronald "Ronnie" Clyde Inman created this Life Tributes page to make it easy to share your memories.