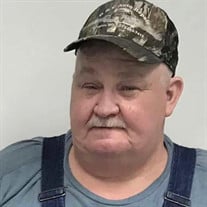 Ronald Dale Lawson was born on December 3, 1953, in Bonne Terre, Missouri to Vernal and Leta (Stricklin) Lawson. He grew up in Viburnum with his loving parents and siblings and graduated from Viburnum High School. Ron was united in marriage to Crystal Richards on July 2, 1994 in Redford, Missouri, and together shared twenty-seven years of love, laughter, and precious memories. Ron was the proud father of three children, Nancy, Sarah, and Dillon. He was a devoted husband, amazing father, and doting grandfather. Family was most important to him and he truly treasured spending time making memories with his loved ones. Ron was a valuable employee for AMAX and Doe Run Lead Mines. He had a strong work ethic and worked hard to help provide for his family. He retired after thirty-four years of dedication in the lead industry. Ron loved being outdoors and was an avid hunter and fisherman. If he wasn't outside, he could be found watching old TV shows. In his spare time, Ron also enjoyed tinkering on old cars and trucks. He always found time to lend a helping hand to family and friends. Ron was happy and content with his life, his home, and his family, which he considered to be his greatest gifts. Ron departed this life on May 17, 2022, in Columbia, Missouri at the age of sixty-eight years. He leaves behind to cherish his memory, loving wife Crystal Lawson of Viburnum, MO; children: Nancy Crump of Irondale, MO, Sarah Allen and husband Chuck of Viburnum, MO, and Dillon Lawson of Viburnum, MO; siblings: Jack Lawson, Joyce Bays, and Donald Lawson and wife Vicki; grandchildren: Shelby Allen, Danielle Woods and husband Brandon, Christopher Allen, Shawn Allen, Casey Spencer and husband Newton, Joseph Crump, and Levi Crump; great-grandchildren: Carson, Hudson, Lawson, Matthew, Kathryn, Hope, Garland, and baby Camden on the way; as well as a host of nieces, nephews, other relatives, and dear friends. Preceding him in death, his parents: Vernal and Leta Lawson; siblings: Sharon Lawson, Vernon Lawson, and David Lawson. Ron was honest, hardworking, and dependable. He will be forever missed by his loving family and dear friends. Funeral Services for Ronald “Ron” Dale Lawson were held Monday, May 23, 2022 in the Wilson Mortuary Viburnum Chapel with Pastor Paul Davis officiating. Song selections played were “Amazing Grace”, “When I Get Where I’m Going”, and “I Want To Stroll Over Heaven With You”. Serving as Pallbearers were Dillon Lawson, Jack Lawson, Donald Lawson, Chuck Allen, Christopher Allen, Shawn Allen, Joseph Crump, and Levi Crump. Burial was in the Upper Indian Creek Cemetery. Arrangements were under the direction of Wilson Mortuary of Viburnum, Missouri. Online condolences may be entered at www.wilsonmortuary.com

Ronald Dale Lawson was born on December 3, 1953, in Bonne Terre, Missouri to Vernal and Leta (Stricklin) Lawson. He grew up in Viburnum with his loving parents and siblings and graduated from Viburnum High School. Ron was united in marriage... View Obituary & Service Information

The family of Ronald "Ron" Dale Lawson created this Life Tributes page to make it easy to share your memories.

Send flowers to the Lawson family.