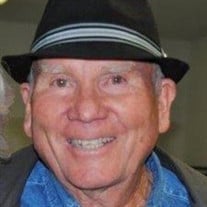 Roscoe "Coy" McCoy Johnson was born May 20, 1930 in Oates, Missouri to Henry and Asiadell (Sheppard) Johnson and passed away August 4, 2021 at his home in Oates surrounded by his loving family at the age of ninety-one years. Coy grew up in Oates and also attended school there. He joined the United States Army and faithfully served his country during the Korean War, as well as spending time in Germany. On August 5, 1950, Coy was united in marriage to Burtafay Barton and they shared fifty happy years until her passing on November 4, 2000. He then married Betty on April 13, 2004 in Eureka Springs, Arkansas and they were blessed with over seventeen years of memories together. Coy started working as a tree trimmer in St. Louis upon his discharge from the military. He went on to work for Wagoner Electric before moving his family from St. Louis back to Oates in late 1966. Coy then began his lengthy career in lead mining. He started at the St. Joe Mines and retired as Shop Foreman with the Fletcher Division. Coy was an avid outdoorsman and he loved hunting, fishing, boating, and camping. He was musically talented and loved singing and playing many different instruments. Coy enjoyed "jam sessions" and was a proud member of the Journeymen in which he played bass guitar. He loved traveling and was always ready for the next trip. He had many routes memorized and had no need for modern GPS. Coy also loved taking pictures and treasured the memories they captured. He was known as the Mayor and Governor of Oates, Missouri, a place that was forever near and dear to his heart. He loved his family deeply and cherished time spent with them, especially his grandchildren and great grandchildren. Coy was a member of the American Legion and a longtime member of Locust Grove United Baptist Church. Coy is survived by his loving wife: Betty Johnson of the home; children: Annette Chervenak and husband Greg of Salem, MO, Lisa Hunt and husband Jim of Mountain View, MO, Connie Cramer and husband Jim of Springfield, TN, Sandra Camden and husband Randy of Farmington, MO, Michael Carl and wife Colleen of Viburnum, MO; brothers: Jimmy Johnson and wife Barbara of Oates, MO, Marshall Johnson and wife Sudia of KY; grandchildren: Justin Chandler, Sheena Hodge, Tatumn Bailey and husband Bret, Chelsey Brakefield and husband Jimmy, Andy Blair and wife Debbie, Jason Blair and wife Delia, Olivia Callahan and husband Dustin, Michaela Carl and Daniel, Talon Camden, Cody Cramer, Jimmy Hunt, and Ashley Hunt; a yard full of great grandchildren, as well as many nieces, nephews, other relatives and friends. Preceding him in death, parents: Henry and Asiadell Johnson; first wife: Burtafay Johnson; one infant son: Rowland Johnson; two stillborn sons: Anthony and Darrin Johnson; siblings: Kenyon Johnson, Verbel Johnson, and Fermetta Volner; grandsons: Brandon Sherrill and Logan Camden. Coy leaves behind a legacy of a life well lived in love and service. He will be forever remembered as Roscoe: the man, the myth, the legend. Graveside Services for Roscoe “Coy” McCoy Johnson were held Saturday, August 7, 2021 in the Myers Cemetery with Pastor Denny Mathes officiating. Special Music was provided by his loving family. Military Honors was provided by the American Legion Post 99 and United States Army. Arrangements were under the direction of Wilson Mortuary of Salem, Missouri. . Online condolences may be entered at wilsonmortuary.com

Roscoe "Coy" McCoy Johnson was born May 20, 1930 in Oates, Missouri to Henry and Asiadell (Sheppard) Johnson and passed away August 4, 2021 at his home in Oates surrounded by his loving family at the age of ninety-one years. Coy grew up in... View Obituary & Service Information

The family of Roscoe "Coy" McCoy Johnson created this Life Tributes page to make it easy to share your memories.