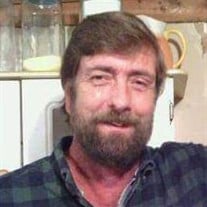 Roy Dwayne McDonald was born August 20, 1961 in St. Louis, Missouri to Roy and Goldie (Volner) McDonald and passed away August 5, 2019 in Salem, Missouri at the age of fifty-seven years. Dwayne grew up in the Salem area and graduated from Licking High School with the Class of 1979 where he was awarded the Citizenship Award. Dwayne was saved and baptized at New Harmony Church when he was eighteen. He honorably served in the United States Army in from March 1981 to May 1981. During his working years, Dwayne drove a bus for a school district in St. Louis, worked at the park store at Montauk, and the Gravel Pit. Dwayne was a proud member of the Fraternal Order of Eagles Aerie 3422 for 30 years and served as Chairman of Trustees. On October 6, 2018, Dwayne was united in marriage to Kathrine Dunn. When given the opportunity you could find him outdoors fishing, camping, hunting, and gardening. Dwayne loved his family deeply and treasured the time spent with them. They enjoyed family get-togethers, grilling, and looked forward to their annual Fall Bash with family and friends. Preceding him in death were his parents, Roy and Goldie McDonald; daughter, Sheena McDonald; brother, Roger Kay; sister, Donna Juluso; and his grandparents. Dwayne is survived by his loving wife: Kathrine McDonald of Salem, MO; two children: Crystal McDonald of Springfield, MO and Brandon McDonald of Union, MO; three step children: Chad Parkins, Michael Parkins and Shannon Parkins of Lethbridge, Alberta; three siblings: Donna English and husband Jim of Plato, MO, Terry McDonald and wife Peggy of Fenton, MO and Sherry McDonald of St. Louis, MO; three grandchildren: Adelyn Grace McDonald, Calee Madison and Drew Bechtold; many nieces, nephews, extended family and friends. Dwayne will be fondly remembered and greatly missed by all those who knew and loved him. Funeral Service for Roy "Dwayne" McDonald was held Saturday, August 10, 2019 in the Wilson Mortuary Salem Chapel with Matt Presti officiating. Song selections played were "Go Rest High On That Mountain" and "Goodbye Friend". Military Honors was provided by American Legion Post 99. All arrangements were under the care and direction of Wilson Mortuary of Salem, Missouri.

Roy Dwayne McDonald was born August 20, 1961 in St. Louis, Missouri to Roy and Goldie (Volner) McDonald and passed away August 5, 2019 in Salem, Missouri at the age of fifty-seven years. Dwayne grew up in the Salem area and graduated from Licking... View Obituary & Service Information

The family of Roy Dwayne McDonald created this Life Tributes page to make it easy to share your memories.

Send flowers to the McDonald family.