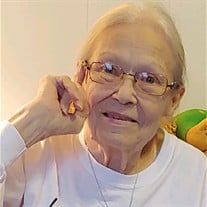 Ruth Alvena (Schafer) Shepherd was born on December 12, 1937, in Dent County, Missouri to Arthur Christopher and Cinderella (Breeding) Schafer. Ruth grew up and attended school in the Upper Parker Community. She was blessed to raise four children: Gena, Gary, Marvin, and Melody. Ruth was a devoted mother and took great pride in providing for her family. Ruth was a dedicated worker, in her early years she worked for Wright Point in Fenton, MO making pens. She later worked as a cook in several nursing homes and schools. Ruth knew her way around the kitchen and was an amazing cook. In her spare time, she enjoyed crafting and making dream catchers along with fishing at Montauk. Ruth loved her family and cherished family gatherings. She was always behind the camera taking pictures of those she loved the most. Ruth was a doting grandmother and treasured the memories made with her grandchildren and great-grandchildren. She was an extraordinary woman and strong pillar of her family. Ruth departed this life March 7, 2022 in Salem, Missouri at the age of eighty-four years. She leaves behind her loving children: Marvin Cooper and wife Debbie of Bucyrus, MO and Melody Waggoner and husband Terry of House Springs, MO; siblings: Jane Cotner of Salem, MO, Glenda Dooley of Salem, MO, and David Schafer and wife Anita of Sparta, WI; sister-in-law: Dormalea Schafer; grandchildren: David, Elizabeth, Katie, Gene, Anthony, Gena, Terry, Sarah, and Colton; and a host of great-grandchildren, nieces, nephews, other relatives, and dear friends. Preceding her in death, children: Gena Cooper-Gibson and Gary Cooper; parents: Arthur and Cinderella Schafer; siblings: Arthur Junior Schafer, Gladys Rasor, and Lester Schafer; and grandson: Jeremy Cooper. Ruth was an amazing, kind, gentle and loving person who touched the lives of many. She will be so missed by her family and friends. Funeral Services for Ruth Alvena (Schafer) Shepherd were held Monday, March 14, 2022 in the Wilson Mortuary Salem Chapel with Pastor Chris Hendrix officiating. Song selections played were “Go Rest High On That Mountain”, “The Rose”, and “I Cross My Heart”. Serving as Pallbearers were Terry Waggoner, Terry Waggoner Jr., David Cooper, Jacob Cooper, Anthony Cooksey, and Colton Cooper. Honorary Pallbearer was Marvin Cooper. Burial was in the Green Forest Cemetery. Arrangements were under the direction of Wilson Mortuary of Salem, Missouri. Online Condolences may be entered at www.wilsonmortuary.com

The family of Ruth Alvena (Schafer) Shepherd created this Life Tributes page to make it easy to share your memories.

Send flowers to the Shepherd family.