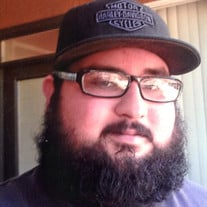 Ryan Dean Nash was born on June 12, 1989 in Phelps County, Missouri to Keith and Angie Nash. Ryan, also known as “Big Nash”, grew up in Salem and graduated with the Class of 2007 from Salem High School. After graduation, Ryan received his Master Mechanic Certificate from the Motorcycle Mechanic Institute in Arizona. Ryan enjoyed working with his hands and piddling on motorcycles. He was currently employed with Roberts-Judson Lumber Company as a Delivery Driver; Ryan also proudly worked as a correctional officer for two years. Ryan liked spending time outdoors hunting and fishing. He had a thirst for life and experiencing all it had to offer. He was a big-hearted teddy bear who had a soft spot for kids, especially his nephew, Walker Dean. Ryan was a proud uncle and enjoyed spending time with him as well as playing with every child that crossed his path. Ryan was a blessing to those who knew him and a friend to everyone, he considered his close friends to be like brothers and sisters. Ryan was fiercely loyal to his friends, especially his brother and best friend, Glenn T. Many knew Ryan only through the lens of the addictions he battled for years. That wasn’t the real Ryan, and those fortunate enough to truly know him immediately recognized him as one who would do anything for anyone. Ryan unfortunately battled a heroin addiction but proudly enjoyed a clean lifestyle the past three years. He always lit up the room with his smile and sense of humor even while struggling with his demons. Ryan passed away on August 24, 2020 at the age of thirty-one years. He was a special young man who will be deeply missed by his parents: Keith and Angie Nash of Salem, MO; brother: Glenn T. Nash and wife Nicky of Crocker, MO; grandparents: Mary Pruett of Salem, MO and Vertis and Gloria Nash of Salem, MO; nephew: Walker Dean Nash; extended family: Beverly Edwards, Bryce Starkey, Chad Cook, Rusty Wells, Michael Stewart, Jimmy Drury, John McDonald, and Taylor Hoffman; as well as several aunts, uncles, other relatives and friends. Preceding him in death, infant sister: Rachel Nash; grandfather: Bill Pruett; and cousin: Trevor Nicholson. Ryan was a man of hope who loved his family deeply. He will be remembered as a loyal son, brother, uncle, and friend. Memorial Contributions may be made in memory of Ryan Dean Nash to his nephew, Walker Dean Nash (who he was very proud of) college fund and may be left at Wilson Mortuary. Online condolences maybe made at www.wilsonmortuary.com Complete obituary to follow

Ryan Dean Nash was born on June 12, 1989 in Phelps County, Missouri to Keith and Angie Nash. Ryan, also known as &#8220;Big Nash&#8221;, grew up in Salem and graduated with the Class of 2007 from Salem High School. After graduation, Ryan received... View Obituary & Service Information

The family of Ryan Dean Nash created this Life Tributes page to make it easy to share your memories.

Send flowers to the Nash family.