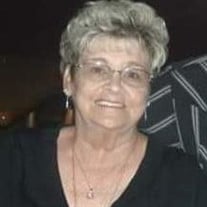 Sally Ann (Martin) Turner was born on April 27, 1942, in St. Louis, Missouri to Clifton and Gladys (Campbell) Martin and passed away on January 23, 2020, in St. Louis, Missouri at the age of seventy-seven years. Sally grew up and attended school in East St. Louis. Sally and Billy fell in love at an early age and were married on August 23, 1958 in Alorton, Illinois. They were blessed with three children: Martin, Christopher, and Lesley. Sally supported and championed many children's charities including the Lakota Indian Children, as well as helping in the Cahokia community where she also worked as a school bus driver. She had a big heart for the kids and organized drives each year to collect coats, gloves, and toys, as well as helping provide dinners for them. Sally found enjoyment in oil painting as well as painting ceramics, and quilting. She was on a bowling league and looked forward to bowling nights. Sally loved playing cards and going to Las Vegas; always wanting to go "one more time". Sally enjoyed fishing and loved having a lake so near to her home. She was also an avid Elvis Presley fan and collected lots of memorabilia over the years. Sally's family were her pride and joy and she treasured time spent with them; especially her grandchildren. She loved family get-together's and having barbecues, playing horse shoes, washers, and backyard volleyball tournaments. Sally was a caring person with a fun spirit. Sally is survived by her loving husband Billy Turner of the home; three children: Martin Turner of Boss, MO; Christopher Turner and wife Melissa of Cahokia, IL, and Lesley England of Bixby, MO; two sisters: Patsy Mathes and husband George of Viburnum, MO and Robin Frazier of Boss, MO; four grandchildren: Peyton Carter and husband Devin, Taylor Turner, Jacob Turner, and Autumn Sherrill; two great-grandchildren: Rayne Carter and Storm Carter; extended family and friends. Preceding her in death were her parents: Clifton and Gladys Martin. Sally was a sweet lady with a big heart who lived a beautiful life inside and out. She leaves behind a legacy of love and will be remembered as a loving wife, mother, grandmother, and friend. She will be greatly missed by all who knew and loved her. Memorial Service for Sally Ann Turner was held Saturday, February 22, 2020 in the Wilson Mortuary Viburnum Chapel with Minister Polly Ford officiating. A loving eulogy was shared by her daughter, Leslie England. Arrangements were under the direction of Wilson Mortuary of Viburnum, Missouri. Memorial Contributions may be made in memory of Sally Ann Turner and left at Wilson Mortuary. Online condolences may be entered at www.wilsonmortuary.com

The family of Sally Ann (Martin) Turner created this Life Tributes page to make it easy to share your memories.

Send flowers to the Turner family.