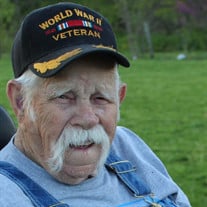 Samuel Paul Wingfield was born on February 24, 1922, in Salem, Missouri to Abner F. and Elizabeth Jane (Scott) Wingfield and passed away on November 21, 2020 surrounded by his loving family at home in Salem, Missouri at the age of ninety-eight years. Paul grew up and attended school in Salem, Missouri. He entered the United States Army and served his country faithfully until his honorable discharge. Paul was united in marriage to the love of his life, Bessie Catherine Busbey on September 24, 1948 in Salem, Arkansas and together shared fifty-seven years of memories before her passing on May 25, 2005. Paul and Bessie were blessed with four children: Larry, Robert, Rodger, and Christina. He was a devoted husband to Bessie and loving father to his children. During his working career, Paul worked hard to provide for his family and taught his children the value of hard work. He was an over the road truck driver and enjoyed traveling the open road. Paul lived a simple life and enjoyed playing and working his draft horses. In his early years, Paul liked to hunt deer, squirrel, and rabbits. He also liked to fish and took several fishing trips with his sons to Clearwater Lake. Most important to him was his family and he truly cherished the memories made with them; especially with his grandchildren, great-grandchildren, and great-great-grandchild. Paul is survived by loving children: Larry Wingfield and wife Rahonda of Salem, MO, Robert Wingfield of Indiana, Rodger Wingfield and Malenie of Salem, MO, and Tina Norris and husband Steve of Salem, Missouri; as well as his grandchildren, great-grandchildren, great-great-grandchild, nieces, nephews, cousins, other relatives, and friends. Preceding him in death, his wife: Bessie Wingfield; parents: Abner and Elizabeth Wingfield; eight siblings; daughter-in-law: Patricia (Strange) Wingfield; and great-grandson: Devon Everett. Paul leaves behind a legacy of love, dedication, and service. His memories will live on in the many lives he touched along the way. Paul will be forever missed. Funeral Services for Samuel Paul Wingfield were held Wednesday, November 25, 2020 in the Wilson Mortuary Salem Chapel with Pastor Charlie Younger officiating. Song selections played were “Daddy’s Hands”, “Grandpa, Tell Me About The Good Old Days”, and “The Great Speckled Bird” and special music by Charlie Younger singing “Where The Roses Never Fade”. Serving as Pallbearers were Larry Wingfield, Scott Norris, Cody Norris, Sam Wingfield, Aaron Pollard, Shawn Pollard, Dylan Pryor, Dawson Norris, Denvor Wingfield, and Christian Carter. Honorary Pallbearers were Dean Busbey and Bob Gorell. Military Honors was provided by the United States Army and American Legion Post 99. Burial was in the Cedar Grove Cemetery. Arrangements were under the direction of Wilson Mortuary of Salem, Missouri. Memorial Contributions may be made in memory of Paul Wingfield and left at Wilson Mortuary. Online condolences may be entered at wilsonmortuary.com

Samuel Paul Wingfield was born on February 24, 1922, in Salem, Missouri to Abner F. and Elizabeth Jane (Scott) Wingfield and passed away on November 21, 2020 surrounded by his loving family at home in Salem, Missouri at the age of ninety-eight... View Obituary & Service Information

The family of Samuel Paul Wingfield created this Life Tributes page to make it easy to share your memories.

Send flowers to the Wingfield family.