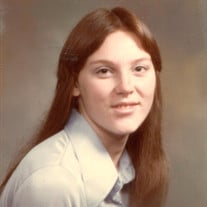 Sandra "Sandy" Kay (Hyser) Cooper was born August 30, 1958, in Belvidere, Illinois to Wilbur and Lois (Carlson) Hyser and passed away peacefully at home, August 26, 2019, in Salem, Missouri at the age of sixty years. Sandy grew up in Garden Prairie, Illinois and graduated from Belvidere High School. After high school, Sandy and Bill Cooper met while they were both working multiple jobs. For their first date, they managed to squeeze in a trip to the river and when Sandy demonstrated that she could bait her own hook and handle her own fish, Bill proposed. After some convincing and trying to schedule around the walleye season opener, Bill and Sandy were married on May 6, 1978. They ran the river for forty-one years and had two children, Shawna and Edward. No stranger to hard work, she bought her first motorcycle with money from her paper route. She ranched with Bill in Montana, was in charge of the respirators for the Troy Mine, and volunteered at Northwood R-4 in Salem. Ultimately, and without a day of college, studied and passed the ABO exam to become the certified optician and Salem's infamous magician of mangled glasses. Sandy loved the outdoors. She enjoyed hunting, fishing, canoeing, and gardening. Sandy's greatest treasure was spending time with her family, friends, and beloved pets. She shared a special relationship with her dad until his passing. He taught her everything she needed to know about life and a lot about mechanics. Sandy thought the world of her two children and adored her grandchildren. Preceding her in death were her father: Wilbur Hyser; father-in-law: Willard Cooper and mother-in-law: Dorothy Cooper. Sandy is survived by her loving husband: Bill Cooper of Salem, MO; two children: Shawna Cooper and husband Kirk of Rochester, MN and Edward Cooper and wife Susan of Poplar Bluff, MO; three grandchildren: Nora Grace Severson, Collin Cooper and Carson Cooper; mother: Lois Hyser of Garden Prairie, IL; six siblings: Victor Hyser and wife Denise of Stillman Valley, IL, Michael Hyser of Garden Prairie, IL, Barbara Raczkowski and husband Richard of Garden Prairie, IL, Donna Howland and husband Jim of Garden Prairie, IL, Nancy Hyser and Dave McCurdy of Rockton, IL and Elizabeth Nelson and husband Elmer of Belvidere, IL; several nieces, nephews, cousins, extended family and friends. Sandy was a loving wife, proud mother, caring grandmother and beloved big sister. Sandy will be forever remembered for her devotion to her family and will be deeply missed. Private Family Services will be held for Sandra "Sandy" Kay (Hyser) Cooper at a later date. Arrangements are under the care of Wilson Mortuary of Salem, Missouri.

Sandra "Sandy" Kay (Hyser) Cooper was born August 30, 1958, in Belvidere, Illinois to Wilbur and Lois (Carlson) Hyser and passed away peacefully at home, August 26, 2019, in Salem, Missouri at the age of sixty years. Sandy grew up in Garden... View Obituary & Service Information

The family of Sandra "Sandy" Kay (Hyser) Cooper created this Life Tributes page to make it easy to share your memories.

Send flowers to the Cooper family.