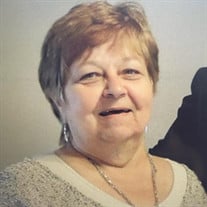 Sandra "Sande" Louise (Atchison) Greenwood was born on September 25, 1944 in Missouri to William Matthew and Ruby Ellen (Smith) Atchison and passed away on April 13, 2021 in Rolla, Missouri at the age of seventy-six years. Sande was united in marriage to the love of her life, Randall "Randy" Lee Greenwood on September 10, 1972 and together shared forty-three years of memories before his passing on December 31, 2015. Sande and Randy were blessed with six children: Victoria, Peter, Joe, Christopher, Matthew, and Josh. Sande was in the first graduating LPN nursing class at Rolla Vocational School in 1968, thus fulfilling a lifelong dream to become a nurse. She worked at hospitals in Rolla, Salem, and Licking, and worked for Dr. Cunningham for many years in his Salem practice. She returned to nursing school in 1995 to become an RN with a special emphasis in hospice care. She worked for several years in the St. Louis area as a visiting hospice nurse making many friends along the way. Sande was an accomplished artist, and devoted many years to painting and art. She loved creating works of art for her family and friends, specializing in oil painting on canvas. She gifted many of those pieces to people who cherish the works received. Sandra taught painting classes in Salem, St. James, and Rolla. She traveled to many interesting places all over Missouri painting murals for businesses. She eventually returned to the Salem area with her husband Randall, and retired from nursing. She became active in the Salem Lutheran Church, the Red Hat Club, and various other social and charitable organizations. Sande is survived by her loving children: Victoria Braloski and husband Tim of Arnold, MO, Peter Laney and wife Teresa of Lake of the Ozarks, MO, Joe Laney and wife Becky of Rolla, MO, Christopher Laney and wife Miranda of Festus, MO, Matthew Greenwood and wife Ashley of High Ridge, MO and Joshua Greenwood and wife Lorie of Salem, MO; numerous grandchildren and great-grandchildren; as well as many nieces, nephews, other relatives, and friends. Sande is preceded in death by, husband: Randall Greenwood; parents: William and Ruby Atchison; siblings: Judy Campbell, John Atchison, and William Atchison. Sande was a special lady and dear friend, she will be deeply missed by all who knew and loved her. Funeral Services for Sandra “Sande” Louise (Atchison) Greenwood were held Saturday, April 17, 2021 in the Wilson Mortuary Salem Chapel with Pastor David Kettner officiating. Song selections played were “Rock of Ages”, “It Is Well”, and “Amazing Grace”. Serving as Pallbearers were Tim Braloski, William Braloski, Andy Summers, Brian Summers, Michael McEthany, and Travis Strange. Burial was in the Cedar Grove Cemetery. Arrangements were under the direction of Wilson Mortuary of Salem, Missouri. Memorial Contributions may be made in memory of Sande Greenwood to Alzheimer's Association and left at Wilson Mortuary. Online condolences may be entered at wilsonmortuary.com

Sandra "Sande" Louise (Atchison) Greenwood was born on September 25, 1944 in Missouri to William Matthew and Ruby Ellen (Smith) Atchison and passed away on April 13, 2021 in Rolla, Missouri at the age of seventy-six years. Sande was united... View Obituary & Service Information

The family of Sandra "Sande" Louise (Atchison) Greenwood created this Life Tributes page to make it easy to share your memories.

Send flowers to the Greenwood family.