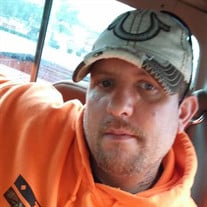 Shawn Jackson Wehmeyer was born in Rolla, MO on April 21, 1984 to Harrison and Denise and passed away July 26, 2019 in Owensville, Missouri at the age of thirty-five years. Shawn spent his childhood in Sullivan, Missouri. He loved to work with his hands and has helped build pole barns and rebuild mobile homes. Shawn lived his life to the fullest. He was a fun outgoing type of person who enjoyed spending time with his family and friends. When given the opportunity you could find him outdoors by the waters fishing, in the boat enjoying a ride or camping. Shawn especially enjoyed the time he got to spend working on his motorcycle. Shawn was engaged to the love of his life, Natasha Volner. Shawn is survived by his mother: Denise Ayala and Robert of Salem, MO; siblings: Cristal Osborne of Montgomery City, MO; Ben Wehmeyer of Salem, MO; Jeff Wehmeyer of Hermann, MO, Gene Wehmeyer of Hermann, MO, Mike Wehmeyer of O'Fallon, MO and Charlie Wehmeyer of Rolla, MO; fiance: Natasha Volner of Sullivan, MO; grandmother: Jane Peacock of Union, MO; many aunts, uncles, nieces, nephews, cousins and friends. Shawn was preceded in death by his father, Harrison Wehmeyer; grandparents, Earnest and Frieda and uncle, Bruce Wehmeyer. Shawn will be greatly missed but fondly remembered by all who knew and loved him. Memorial Service for Shawn Wehmeyer was held Saturday, August 3, 2019 with Pastor Anna Boyce officiating. Memories were shared by friends and family. Song selections played were "You Should Be Here", "Go Rest High On That Mountain" and "Bartender". The "Rolling Thunder" was provided by the Christian Motorcyclist Association. All arrangements were under the direction of Wilson Mortuary of Salem, Missouri.

Shawn Jackson Wehmeyer was born in Rolla, MO on April 21, 1984 to Harrison and Denise and passed away July 26, 2019 in Owensville, Missouri at the age of thirty-five years. Shawn spent his childhood in Sullivan, Missouri. He loved to... View Obituary & Service Information

The family of Shawn Jackson Wehmeyer created this Life Tributes page to make it easy to share your memories.

Send flowers to the Wehmeyer family.