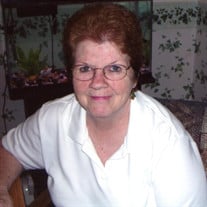 Suzanne “Sue” Ritter was born on May 31, 1946 in Boss, Missouri to Vernell Lavondell and Wilma Claudene (Smith) Botkin and passed away on September 19, 2020 in Salem, Missouri at the age of seventy-four years. Sue grew up in the Boss area and attended Caledonia High School. On August 17, 1963, at the age of sixteen, she married the love of her life, Bernie Ritter. Together Sue and Bernie shared fifty-seven years of memories and were blessed with two sons: Bernie Destry and Chad Michael. Sue was a dedicated housewife who was devoted to her family. She enjoyed spending time in the kitchen cooking big family meals. Sue loved working with her hands and crocheted many afghans, doily’s, and dolls. In her spare time, Sue liked making flower arrangements. Sue was a woman of faith and longtime member of Boss Assembly Church. Most important to Sue was her family and she deeply cherished the time spent with them; especially the memories made with her grandchildren and great-grandchildren. Sue is survived by her loving husband Bernie Ritter of Boss, MO; two sons: Bernie "Destry" Ritter of Salem, MO and Chad Michael Ritter of Salem, MO; one brother: Vernell "Stormy" Botkin and wife Joann of Boss, MO; one sister: Caroline Thompson of Salem, MO; four grandchildren: Michael Ritter, Jacob Ritter and wife Nicole, Vicci Chandler and husband Caleb, and Caleb Ritter; two great-grandchildren: Emma Lynn and Liam Iven; as well as many nieces, nephews, other relatives and friends. Preceding her in death were, her parents: Vernell and Wilma Botkin. Sue will be remembered as a loving wife, mother, grandmother, great-grandmother, sister, and friend. She will be fondly remembered but deeply missed by all who knew and loved her. Funeral Services for Suzanne “Sue” Ritter were held Thursday, September 24, 2020 at the Boss Assembly of God Church with Pastor Paul Davis officiating. Special music was provided by Pam Davis and Dave Major with additional song selection “I’m Free”. Serving as Pallbearers were Destry Ritter, Michael Ritter, Jacob Ritter, Kirk Emory, Caleb Chandler, and Stormy Botkin. Honorary Pallbearer was Caleb Ritter. Burial was in the Boss Cemetery. Arrangements were under the direction of Wilson Mortuary of Salem, Missouri. Memorial Contributions may be made in memory of Sue Ritter left at Wilson Mortuary Online condolences maybe made at www.wilsonmortuary.com

Suzanne &#8220;Sue&#8221; Ritter was born on May 31, 1946 in Boss, Missouri to Vernell Lavondell and Wilma Claudene (Smith) Botkin and passed away on September 19, 2020 in Salem, Missouri at the age of seventy-four years. Sue grew up in the... View Obituary & Service Information

The family of Suzanne "Sue" Ritter created this Life Tributes page to make it easy to share your memories.

Send flowers to the Ritter family.